All species of Carex are perennial, although some species, such as C. bebbii and C. viridula can fruit in their first year of growth, and may not survive longer. They typically have rhizomes, stolons or short rootstocks, but some species grow in tufts (caespitose). The culm – the flower-bearing stalk – is unbranched and usually erect. It is usually distinctly triangular in section.

The leaves of Carex comprise a blade, which extends away from the stalk, and a sheath, which encloses part of the stalk. The blade is normally long and flat, but may be folded, inrolled, channelled or absent. The leaves have parallel veins and a distinct midrib. Where the blade meets the culm there is a structure called the ligule. The colour of foliage may be green, red or brown, and "ranges from fine and hair-like, sometimes with curled tips, to quite broad with a noticeable midrib and sometimes razor sharp edges". 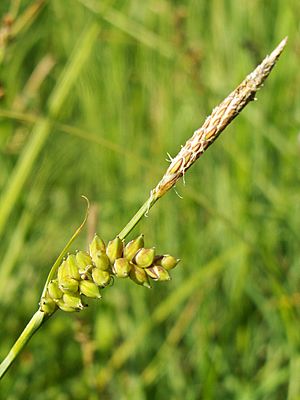 The flowers of Carex are small and are combined into spikes, which are themselves combined into a larger inflorescence. The spike typically contains many flowers, but can hold as few as one in some species. Almost all Carex species are monoecious; each flower is either male (staminate) or female (pistillate). A few species are dioecious. Sedges exhibit diverse arrangements of male and female flowers. Often, the lower spikes are entirely pistillate and upper spikes staminate, with one or more spikes in between having pistillate flowers near the base and staminate flowers near the tip. In other species, all spikes are similar. In that case, they may have male flowers above and female flowers below (androgynous) or female flowers above and male flowers below (gynecandrous). In relatively few species, the arrangement of flowers is irregular.

The defining structure of the genus Carex is the bottle-shaped bract surrounding each female flower. This structure is called the perigynium or utricle, a modified prophyll. It is typically extended into a "rostrum" or beak, which is often divided at the tip (bifid) into two teeth. The shape, venation, and vestiture (hairs) of the perigynium are important structures for distinguishing Carex species.

The fruit of Carex is a dry, one-seeded indehiscent achene or nut which grows within the perigynium. Perigynium features aid in fruit dispersal.

Carex species are found across most of the world, albeit with few species in tropical lowlands, and relatively few in sub-Saharan Africa. Most (but not all) sedges are found in wetlands – such as marshes, calcareous fens, bogs and other peatlands, pond and stream banks, riparian zones, and even ditches. They are one of the dominant plant groups in arctic and alpine tundra, and in wetland habitats with a water depth of up to 50 cm (20 in).

The genus Carex was established by Carl Linnaeus in his work Species Plantarum in 1753, and is one of the largest genera of flowering plants. Estimates of the number of species vary from about 1100 to almost 2000. Carex displays the most dynamic chromosome evolution of all flowering plants. Chromosome numbers range from n = 6 to n = 66, and over 100 species are known to show variation in chromosome number within the species, with differences of up to 10 chromosomes between populations.

Carex has been divided into subgenera in a number of ways. The most influential was Georg Kükenthal's classification using four subgenera – Carex, Vignea, Indocarex and Primocarex – based primarily on the arrangement of the male and female flowers. There has been considerable debate about the status of these four groups, with some species being transferred between groups and some authors, such as Kenneth Kent Mackenzie, eschewing the subgenera altogether and dividing the genus directly into sections. The genus is now divided into around four subgenera, some of which may not, however, be monophyletic:

Several fossil fruits of two Carex species have been described from middle Miocene strata of the Fasterholt area near Silkeborg in Central Jutland, Denmark.

Carex species and cultivars are popular in horticulture, particularly in shady positions. Native species are used in wildland habitat restoration projects, natural landscaping, and in sustainable landscaping as drought-tolerant grass replacements for lawns and garden meadows. Some require damp or wet conditions, others are relatively drought-tolerant. Propagation is by seed or division in spring.

A mix of dried specimens of several species of Carex (including Carex vesicaria) have a history of being used as thermal insulation in footwear (such as nutukas used by Sámi people). Sennegrass is one of the names for such mixes. During the first human expedition to the South Pole in 1911, such a mix were used in skaller, when camps had been set (after each stretch of travelling had been completed). Carsten Borchgrevink of the British Antarctic Expedition 1898-1900 reported “I found the Lapps method of never using socks in their Finn boots answered well. Socks are never used in Finnmarken in winter time, but ‘senne grass’ which they, of course, had a special method of arranging in the 'komager' (Finn boots) … if you get wet feet while wearing the grass in the ‘komager’ you will be warmer than ever, as the fresh grass will, by the moisture and the heat of your feet, in a way start to burn or produce its own heat by spontaneous combustion. The great thing seems to be to arrange the grass properly in the boots, and although we all tried to imitate the Finns in their skill at this work, none of us felt as warm on our feet as when they had helped us.”

Species serve as a food source for numerous animals, and some are used as a livestock hay.

All content from Kiddle encyclopedia articles (including the article images and facts) can be freely used under Attribution-ShareAlike license, unless stated otherwise. Cite this article:
Carex Facts for Kids. Kiddle Encyclopedia.