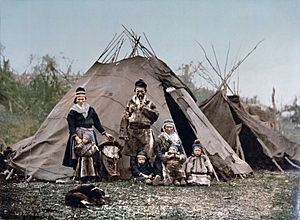 The Sami people (also called Lapps or spelled as Saami) are an ethnic group of people living in Lapland. Lapland is an area in the far north of Europe. Lapland is a part of the countries of Norway, Sweden, Finland and Russia. Sami people live in all of these countries. The number of Sami people in the world is between 80,000 to 135,000.

There are 10 different spoken Sami languages. Six of these can be written.

The best known of the Sami people were the Lapp nomads who raised reindeer. The Lapps lived in their cold environment by domesticating the reindeer. The Lapps were able to get everything they needed from the deer. They ate mostly meat, milk, and cheese. Their clothing was made from reindeer skins and wool. Their tents were also made from raindeer skins. The wool clothes were beautifully decorated. 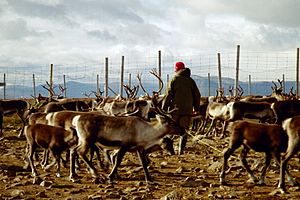 The Lapps protected the herds, moving with them as they migrated from summer to winter pastures. They used reindeer to pull sleds carrying their supplies. During the winter, the herds moved south of where the trees grew. The Lapps lived nearby in homes made of logs or sod. The Lapps were careful not to waste anything they got from the reindeer. Milk was taken from the reindeer to drink or make cheese. Meat was taken for food. The blood was frozen and then used for soup and pancakes. Knives and belt buckles were carved from the bones and antlers. The sinews (tendons) were used as sewing thread. Cleaned-out stomachs were used to carry milk or cheese. Every part of a dead reindeer was used.

Winter clothing was made from layers of reindeer skin. The inside layer would be worn with the fur facing in toward the person's skin. The second layer was worn with the fur facing out. Boots were also made of fur and lined with grass that had been gathered during the short summer. Every evening the grass would be taken out and dried by the fire, so it would be ready to use again the next day. This way, a Lapp could be warm and comfortable in even the coldest weather.

Today only a few of the Lapp people still follow the herds. Those few use modern tools on their ancient migration. They use snowmobiles to herd the reindeer and rifles to kill the wolves that chase them. Even helicopters and radios are used to locate and move the reindeer. Most of the Lapp people now live on small farms in one of the four nations of Lapland. They raise crops and animals, including a few reindeer, to meet their needs. The sale of reindeer meat is an important source of income for the Lapp people. 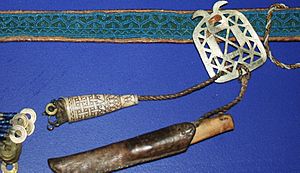 Sami crafts are called 'Duodji'. The men make knives, drums and 'guksi' (burl cups) from wood, bone, and antlers. The women use leather and roots to make 'gakti' (clothing). Women also use birch and spruce to weave baskets. 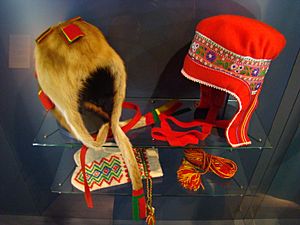 Sami clothing is called 'gakti' and was originally made from reindeer leather, but now it is usually made from wool, cotton, or silk. Usually, there are different types of clothing for men and women. 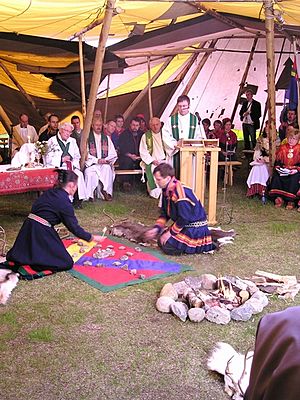 Sami shamanism is the main religion of the Sami people. These beliefs are connected to the land, animalism, and the supernatural. There is some practice of bear worship. Sami shamanism is a polytheistic religion. It believes there are many gods. The Sami shaman are called the 'Noadi'. There are some 'wise men' and 'wise women' who try to heal people who are sick. They use rituals and herbal medicine. Some Sami people have changed their beliefs to Christianity. They join either the Russian Orthodox Church or the Lutheran.

All content from Kiddle encyclopedia articles (including the article images and facts) can be freely used under Attribution-ShareAlike license, unless stated otherwise. Cite this article:
Sami people Facts for Kids. Kiddle Encyclopedia.