Church of Sweden facts for kids 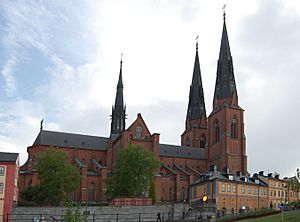 The Church of Sweden (Swedish: Svenska kyrkan), is a Lutheran-Protestant Christian denomination in Sweden. The denomination was established in the 16th century, when Sweden converted from Catholicism to Protestantism, and became the Swedish state church. As the 19th and 20th centuries progressed, it moved towards a more liberal theology and ecumenism.

In late August 1995, the Swedish government and the Church of Sweden decided to go separate ways from 1 January 2000. The denomination mostly practices infant baptism.

All content from Kiddle encyclopedia articles (including the article images and facts) can be freely used under Attribution-ShareAlike license, unless stated otherwise. Cite this article:
Church of Sweden Facts for Kids. Kiddle Encyclopedia.