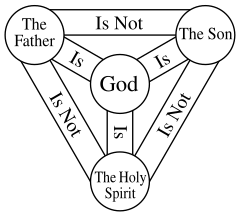 Diagram of Trinity relationships, based on the first half of the Athanasian Creed.

The Athanasian Creed is a Christian statement of faith. It is also often referred to as Quicumque vult (can be translated as Whoever wants, the first two words of the statement). It is the first known creed to talk about trinity. It has been in use since the 6th century, mainly in the western part of the Church. It is not used very much today, the Nicene Creed has largely replaced it.

From about the 9th century people thought that St. Athanasius had written it. Athanasus lived in the 4th century in Egypt. Today, this view is largely seen as false. This is because of the following:

Today, most people think it came from Gaul around the year 500. Its positions are similar to those taken by St. Ambrose of Milan, Augustine of Hippo or Vincent of Lérins. J.N.D. Kelly, a contemporary patristics scholar, believes that St. Vincent of Lérins was not its author, but suggests that it may have come from the same bacground, namely the area of Lerins in southern Gaul. Caesarius of Arles is one of the possible authors.

The oldest surviving manuscripts of the Athanasian creed date from the late 8th century.

Martin Luther said there were three statements of faith, the Nicene Creed (Credo in unum deum, I believe in one god..), the Te Deum (Te Deum Laudamus,..., Thee, O Lord, we praise), and the Athanasian Creed.

It explains Trinity, in such a way to stand against positions such as Arianism. It has the filioque.

All content from Kiddle encyclopedia articles (including the article images and facts) can be freely used under Attribution-ShareAlike license, unless stated otherwise. Cite this article:
Athanasian Creed Facts for Kids. Kiddle Encyclopedia.