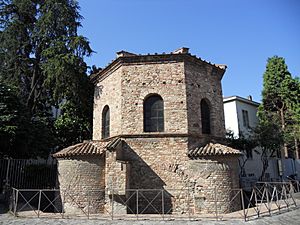 A baptistry of the Arians in Ravenna

Arianism is a doctrine that came from Arius, a priest who taught in Alexandria. To many Christians, the teachings of Arianism are heretical and are not the correct Christian teachings. For this reason, Arianism has stopped being practiced today, but Arians were a powerful part of Christianity from the 4th to the 7th centuries AD.

Arianism simply teaches that Jesus was not God. For this reason, Arianism opposes the dogma of the Holy Trinity. In 325 AD, the Nicene Creed was made, which the early Christians used to defeat Arianism, with the statement: "We believe in one Lord Jesus Christ, the Son of God...begotten, not made, consubstantial with the Father."

The main difference between the beliefs of Arianism and other main Christian denominations is that the Arians did not believe in the Holy Trinity, which is a way that other Christian churches use to explain God. The information that we have today comes from the writing of people who were against Arianism and said the beliefs were wrong. These writings say that Arianism believed:

In the 16th century there was again a movement against the belief in Trinity. Fausto Sozzini (1539-1604) was well known for teaching this. Another one was Ferenc Dávid (1510s - 1579). These movements developed into what is called Unitarianism today. Unitarians believe that there is only one person in god, not the three-in-one dogma of trinity. Some of the teachings of Jehovah's Witnesses are close to some of the things Arians believed. It is different only in that Arians believed the holy spirit is a person and Jehovah's Witnesses teach it is not a person, but a force God uses to do His will. It would however be false to call them Arians, as they reject many Arian teachings. Mormons and Oneness Pentecostalism also reject the Trinity but for different reasons other than Arianism.

All content from Kiddle encyclopedia articles (including the article images and facts) can be freely used under Attribution-ShareAlike license, unless stated otherwise. Cite this article:
Arianism Facts for Kids. Kiddle Encyclopedia.