The First Council of Nicaea was held in Nicaea, in Bithynia in 325. Nicea is the city of Iznik in Turkey. The Roman Emperor Constantine I called the bishops of the Roman Empire to the first ecumenical conference of the early Christian Church. It had as most important result the first uniform Christian doctrine, called the Nicene Creed.

With the creation of the creed, a precedent was established for subsequent 'general (ecumenical) councils of Bishops' (Synods) to create statements of belief and church law. The purpose was to define unity of beliefs for the whole of Christendom. 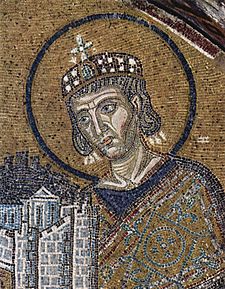 Constantine I called the bishops of the Christian Church to Nicaea to deal with divisions in the Church. (mosaic in Hagia Sophia, Constantinople, c. 1000)

The agenda of the synod were:

The purpose of the council was to resolve disagreements in the Church of Alexandria over the nature of Jesus in relationship to the Father; in particular, whether Jesus was of the same substance as God the Father or merely of similar substance. St. Alexander of Alexandria and Athanasius took the first position; the popular presbyter Arius, from whom the term Arian controversy comes, took the second. The council decided against the Arians (of the estimated 250-318 attendees, all but 2 voted against Arius). But many of the Eastern bishops who were pro-Arian, were prevented from reaching the Council until after the vote had been taken.

Another result of the council was an agreement on the date of the Christian Passover (Pascha in Greek; Easter in modern English), the most important feast of the ecclesiastical calendar. The council decided in favour of celebrating the resurrection on the first Sunday after the first full moon following the vernal equinox, independently of the Bible's Hebrew calendar and authorized the Bishop of Alexandria to announce annually the exact date to his fellow bishops.

The Council of Nicaea was historically significant because it was the first effort to come to a consensus in the church through an assembly representing all of Christendom. "It was the first occasion for the development of technical Christology." Further, "Constantine in convoking and presiding over the council signaled a measure of imperial control over the church." With the creation of the Nicene Creed, a precedent was established for subsequent general councils to create a statement of belief and canons which were intended to become guidelines for doctrinal orthodoxy and a source of unity for the whole of Christendom — a momentous event in the history of the Church and subsequent history of Europe.

The First Council of Nicaea was called by Constantine I upon the recommendations of a synod led by Hosius of Cordoba in the Eastertide of 325. To most bishops, the teachings of Arius were heretical and a danger to the salvation of souls. In the summer of 325, the bishops of all provinces came to Nicaea (now known as İznik, in modern-day Turkey), a place easily accessible to the majority of them, particularly those of Asia Minor, Syria, Palestine, Egypt, Greece, and Thrace.

Approximately 300 bishops attended, from every region of the Empire except Britain. This was the first general council in the history of the Church since the Apostolic Council of Jerusalem. In the Council of Nicaea, “The Church had taken her first great step to define doctrine more precisely in response to a challenge from a heretical theology.” The resolutions in the council, being ecumenical, were intended for the whole Church.

Constantine had invited all 1800 bishops of the Christian church (about 1000 in the east and 800 in the west), but only 250 to 320 bishops actually participated. Eusebius of Caesarea counted 250, Athanasius of Alexandria counted 318, and Eustathius of Antioch counted 270 (all three were present at the council). Later, Socrates Scholasticus recorded more than 300, and Evagrius, Hilarius, Jerome and Rufinus recorded 318.

The bishops were given free travel to the council, as well as lodging. These bishops did not travel alone; each one had permission to bring with him two priests and three deacons; so the total number of attendees would have been above 1500. Eusebius speaks of an almost innumerable host of accompanying priests, deacons and acolytes.

A special prominence was also attached to this council because the persecution of Christians had just ended with the February 313 Edict of Milan by Emperors Constantine and Licinius.

The Eastern bishops formed the great majority. Of these, the first rank was held by the three patriarchs: Alexander of Alexandria, Eustathius of Antioch, and Macarius of Jerusalem. The Latin-speaking provinces sent at least five representatives: Marcus of Calabria from Italia, Cecilian of Carthage from Africa, Hosius of Córdoba from Hispania, Nicasius of Dijon from Gaul, and Domnus of Stridon from the province of the Danube. Pope Silvester I did not attend, telling he was ill, but he was represented by two priests.

Athanasius of Alexandria, a young deacon and companion of Bishop Alexander of Alexandria, was among the assistants. Athanasius eventually spent most of his life battling against Arianism. Alexander of Constantinople, then a presbyter, was also present as representative of his aged bishop.

All content from Kiddle encyclopedia articles (including the article images and facts) can be freely used under Attribution-ShareAlike license, unless stated otherwise. Cite this article:
First Council of Nicaea Facts for Kids. Kiddle Encyclopedia.