Canon law is the body of laws and regulations made by ecclesiastical authority (Church leadership), for the government of a Christian organization or church and its members. It is the internal ecclesiastical law, or operational policy, governing the Catholic Church (both the Latin Church and the Eastern Catholic Churches), the Eastern Orthodox and Oriental Orthodox churches, and the individual national churches within the Anglican Communion. The way that such church law is legislated, interpreted and at times adjudicated varies widely among these three bodies of churches. In all three traditions, a canon was originally a rule adopted by a church council; these canons formed the foundation of canon law. 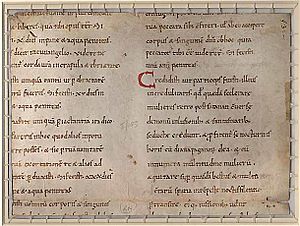 Image of pages from the Decretum of Burchard of Worms, the 11th-century book of canon law.

The Roman Catholic Church has the oldest continuously functioning legal system in the Western World. It is older than the common and European civil law traditions. What began with rules ("canons") adopted by the Apostles themselves at the Council of Jerusalem in the First Century led to a highly complex and original legal system that included norms of the New Testament, of the Hebrew (Old Testament), Roman, Visigothic, Saxon, and Celtic legal traditions with thousands of years of human experience.

All content from Kiddle encyclopedia articles (including the article images and facts) can be freely used under Attribution-ShareAlike license, unless stated otherwise. Cite this article:
Canon law Facts for Kids. Kiddle Encyclopedia.