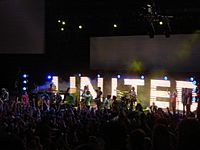 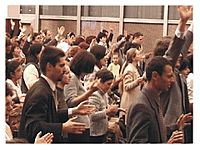 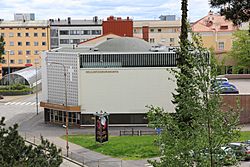 A Pentecostal church in Jyväskylä, Finland
This page is about the Protestant Christian faith. For other meanings, see Pentecostal Church (disambiguation).

Pentecostalism is a faith within Evangelical Christianity. It believes in a personal experience with God through the baptism of the Holy Spirit (Acts 2:38); the same as in the Biblical account on the Day of Pentecost. Pentecostalism is similar to the Charismatic groups, but it came about earlier and separated from the main church branches. Charismatic Christians, at least in the beginning, tended to stay in their denominations and did not divide away.

There are three types of Pentecostal churches. Most believe that one must be saved by believing in Jesus as their Savior; to be forgiven for their sins and to be pleasing to God. Pentecostals also believe, like most other evangelicals, that the Bible is true and must be obeyed in decisions of faith. In this majority group, speaking in tongues is the sign of the Baptism of the Holy Spirit and is not required for salvation. To this group, the Baptism of the Holy Spirit is a supernatural gift for ministry that one receives after they have become a Christian.

Pentecostal churches believe that Jesus still heals the sick, with the power of the Holy Spirit.

List of Christian denominations by number of members
This list indicates that there may be 150 million Pentecostals.

All content from Kiddle encyclopedia articles (including the article images and facts) can be freely used under Attribution-ShareAlike license, unless stated otherwise. Cite this article:
Pentecostalism Facts for Kids. Kiddle Encyclopedia.