Elias Lönnrot, the compiler of the Finnish national epic, the Kalevala, gave the city the nickname "Athens of Finland". This nickname refers to the major role of Jyväskylä as an educational centre.

The works of the most famous Finnish architect Alvar Aalto can be seen throughout the city. The city hosts the Neste Oil Rally Finland, which is part of the World Rally Championship. It is also home of the annual Jyväskylä Arts Festival.

The city has been one of the fastest growing cities in Finland during the 20th century. 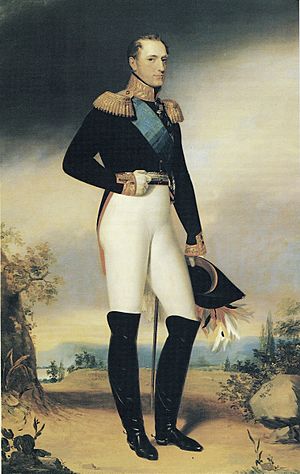 Nicholas I of Russia

The City of Jyväskylä was founded on 22 March 1837, when Emperor of Russia and Grand Duke of Finland, Nicholas I of Russia, signed the charter of the city and the infrastructure was essentially built from scratch. At the times Finnish military battalion Suomen kaarti participated under his rule in military operations against the Polish November Uprising and later in Hungary, Turkey and Bessarabia (today Moldova). The original town was built between Lake Jyväsjärvi and the Jyväskylä ridge, and consisted of most of the current grid-style city centre.

The establishment of schools in the 1850s and 1860s proved to be the most significant step in regards to the later development of Jyväskylä. The first three Finnish-speaking schools in the world were founded in Jyväskylä, the lycée in 1858, the teachers’ college in 1863, and the girls’ school in 1864. Well-trained teaching staff and pupils from different parts of the country made the atmosphere of Jyväskylä irreplaceable.

Jyväskylä hosts the headquarters of Finnish Air Force, in Tikkakoski. As a central location, it has traditionally been important base for military operations. Jyväskylä was also known as major firearms manufacturer (Tikkakoski) during the world wars, producing machine guns and ammunition.

According to reporting in Helsingin Sanomat, since the 1990s Jyväskylä has served as a signals intelligence collection site, primarily targeting military maneuvers around St. Petersburg. 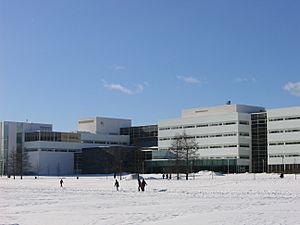 Agora Center is a good example of the modern heart of the economy in Jyväskylä. It is a workplace for teachers, scientists, and IT workers

Because of excellent connections, Jyväskylä was a busy marketplace even before the first permanent settlements were founded in the current city centre. The establishment of Finland’s first three Finnish-speaking schools proved to be the most significant steps in regards to later development of Jyväskylä. Educational services became the heart of the economic growth of the city.

In 1912 Wilhelm Schauman founded a plywood mill on the shores of Jyväsjärvi. Soon other kinds of forest based businesses opened factories and premises in the city. Thus, lumber, pulp, and paper became the second stronghold of the economy in Jyväskylä. Later, the high quality education and paper machinery industry tempted information technology businesses to settle in the city.

Nowadays, the main sources of livelihood in Jyväskylä are educational and health care services, paper machinery production, information technology, and renewable energy. The biggest public employers are the City of Jyväskylä, the Central Finland Health Care District, the University of Jyväskylä, and the Air Force Academy. 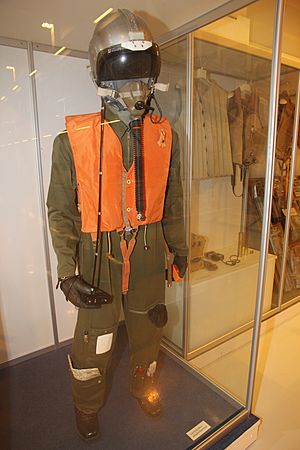 The city hosts the Craft Museum of Finland, which presents a range of different handicraft techniques from across the country, as well as a centre dedicated to the conservation of textiles that serves private customers, museums and organisations. The National Costume Center of Finland forms a part of the museum.

The Aviation Museum of Central Finland near the Jyväskylä Airport in Tikkakoski exhibits the aviation history of Finland.

Jyväskylä Art Museum, located the city centre is the regional art museum of Central Finland. In collaboration with the Centre for Creative Photography, the Jyväskylä Art Museum maintains The Ratamo Printmaking and Photography Centre. This centre consists of the Galleria Ratamo along with a printmaking workshop, photography studio and artist workspaces all situated in Jyväskylä’s former roundhouse.

In addition, historical churches in the city are open for public, most notables of them being the Taulumäki Church and the Jyväskylä City Church. 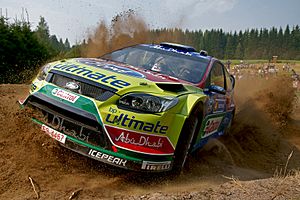 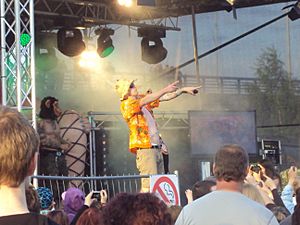 The city hosts the Neste Oil Rally Finland (formerly known as the 1000 Lakes Rally). It is the biggest annually organised public event in the Nordic countries, gathering over 500,000 spectators every year. The rally has been held since 1951, first as a national competition, then from 1959 on as a European Rally Championship event and since the introduction of the World Rally Championship in 1973, as Finland's WRC event.

Ice hockey venue Synergia-areena, Hippos Finnish baseball stadium, swimming hall AaltoAlvari, and many other primary sport venues of the city are located in Hippos, two kilometres (1.2 miles) away from the city centre. The Matti Nykänen ski jumping hill is located next to the Laajavuori ski resort just few kilometres west from the city centre. 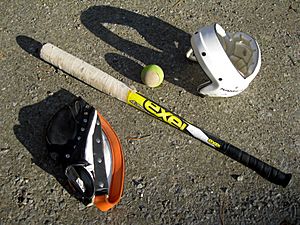 The main football stadium lies on the slopes of Harju just next to the city centre. The Killeri hippodrome on the western parts of the city serves different horse racing competitions. At winter time, amateur ice skaters can practice their skills in Viitaniemi or on the lake Jyväsjärvi, which has a 3.5 km (2.2 mi) long ice skating track.

All content from Kiddle encyclopedia articles (including the article images and facts) can be freely used under Attribution-ShareAlike license, unless stated otherwise. Cite this article:
Jyväskylä Facts for Kids. Kiddle Encyclopedia.