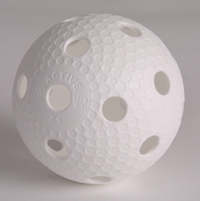 A floorball ball. This is a plastic precision type ball, characterized by 1516 tiny dimples that reduce air resistance, as well as friction on the floor.

Floorball is an indoor team sport similar to hockey. Floorball is usually played in gyms with little plastic balls and special hockey sticks. In floorball, there are basically five players with sticks and a goalkeeper without any special equipment. The goalkeeper has only special jersey and helmet. Floorball is very popular today and in 2020 it is going to be part of the Summer Olympic Games.

Floorball was invited in the USA, but has been most popular in Sweden since the 1970s. Its popularity quickly spread to Finland and Switzerland, but with different rules. For example, in Switzerland a goalkeeper is allowed to use a stick. In 1986, the International Floorball Federation (IFF) was founded and rules became the same.

Floorball is played in a gym on an area of 40x20 meters bordered by boards 50 centimetres high. The formations are very similar to ice hockey. Both teams play with 3 attackers, 2 defenders and a goalkeeper. They can relieve whenever they want. Floorball is played 3x20 minutes with 15 minutes breaks. This is only for men. In juniors matches the time is different. Floorball is a contact sport so players can play with their body, but it has limits. The only thing they can give a goalkeeper is a stick, but they can handle the ball with the body. They cannot hit the ball with their hands or head and they cannot jump. The goalkeeper can hit the ball with every part of his body and he can it for 3 seconds. In floorball, a player can be excluded for 2 minutes when he breaks the rules.

The most redistricted players have in Sweden. The second is Finland and the third is Czech Republic.

IFF organises world championships in floorball. Every year they are in a different country.

All content from Kiddle encyclopedia articles (including the article images and facts) can be freely used under Attribution-ShareAlike license, unless stated otherwise. Cite this article:
Floorball Facts for Kids. Kiddle Encyclopedia.