Lahti is a city in Päijänne Tavastia, Finland. Literally it means bay. It is part of the province of Southern Finland. As of April 2014, there were about 103,450 people living in Lahti. Lahti was the eighth biggest city in Finland as of 31 August 2012.

The concert house Sibelius Hall (Finnish: Sibeliustalo) in Lahti is named after Jean Sibelius. Many stars, including Antti Tuisku, have performed there.

Lahti's transport was big already at 14th century. Lahti was first a village that belonged to Hollola. It was been burned in 1877. Lahti has been a city since 1905. The population then was 2,779. 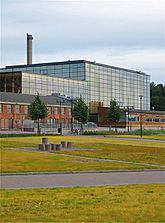 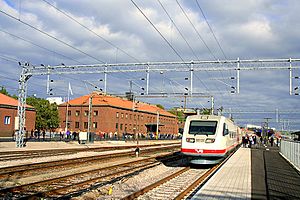 All content from Kiddle encyclopedia articles (including the article images and facts) can be freely used under Attribution-ShareAlike license, unless stated otherwise. Cite this article:
Lahti Facts for Kids. Kiddle Encyclopedia.