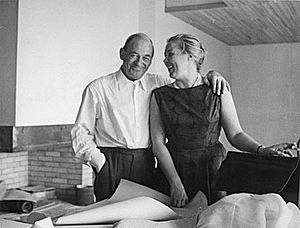 Alvar Aalto with his wife Elissa

Hugo Alvar Henrik Aalto (February 3, 1898 – May 11, 1976 ) was a Finnish architect who made many important contributions to architecture. Sometimes called the "Father of Modernism".

Alvar Aalto was born in Kuortane, Finland. He studied architecture at the Technical University of Helsinki from 1916 to 1921. He returned to Jyväskylä, where he opened his first architectural office in 1923. Alvar Aalto died in May 11, 1976, in Helsinki.

All content from Kiddle encyclopedia articles (including the article images and facts) can be freely used under Attribution-ShareAlike license, unless stated otherwise. Cite this article:
Hugo Alvar Henrik Aalto Facts for Kids. Kiddle Encyclopedia.