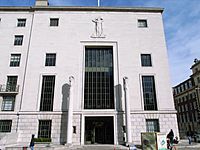 The Royal Institute of British Architects (RIBA) is a professional organisation for architects in the United Kingdom.

It was originally named the Institute of British Architects in London and formed in 1834. The group was started by several important architects, including Philip Hardwick, Thomas Allom, William Donthorne, Thomas Leverton Donaldson, John Buonarotti Papworth and Thomas de Grey, 2nd Earl de Grey. It was awarded a Royal Charter in 1837, becoming the Royal Institute of British Architects in London, eventually dropping the reference to London in 1892.

The RIBA is a member organisation, with 44,000 members. Chartered Members are allowed to call themselves chartered architects and to add the post-nominals RIBA after their name; Student Members are not permitted to do so. In the past, fellowships of the institute were given, but this has stopped; those who continue to hold this title instead add FRIBA.

RIBA is based at 66 Portland Place, London—a 1930s Grade II* listed building designed by architect George Grey Wornum with sculptures by Edward Bainbridge Copnall and James Woodford. The Institute also maintains a dozen regional offices around the United Kingdom. Parts of the London building are open to the public, including the exhibition galleries and Library. It has a large architectural bookshop, a café, restaurant and lecture theatres. Rooms are hired out for events.

All content from Kiddle encyclopedia articles (including the article images and facts) can be freely used under Attribution-ShareAlike license, unless stated otherwise. Cite this article:
Royal Institute of British Architects Facts for Kids. Kiddle Encyclopedia.