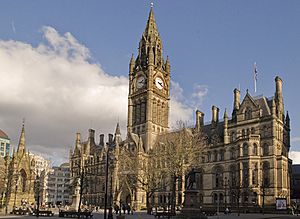 Alfred Waterhouse (19 July 1830 – 22 August 1905) was a English architect, particularly associated with the Victorian Gothic revival. He is perhaps best known for his design for Manchester Town Hall and the Natural History Museum in London, although he also built a wide variety of other buildings throughout the country. Financially speaking, Waterhouse was probably the most successful of all Victorian architects. Though expert within Gothic and Renaissance styles, Waterhouse never limited himself to a single architectural style.

All content from Kiddle encyclopedia articles (including the article images and facts) can be freely used under Attribution-ShareAlike license, unless stated otherwise. Cite this article:
Alfred Waterhouse Facts for Kids. Kiddle Encyclopedia.