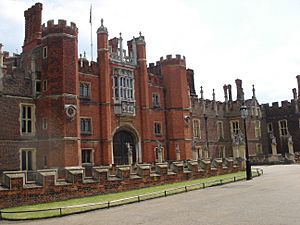 Hampton Court Palace is a royal palace in the London Borough of Richmond upon Thames, Greater London. The British royal family have not lived there since the 18th century. The palace is 11.7 miles (18.8 km) south west of Charing Cross and upstream of Central London on the River Thames.

The palace was bought by the English monarchy in 1528. This was when Thomas Wolsey gave it to Henry VIII. It stayed a royal palace for the next 220 years. In its lifetime, it saw twelve monarchs on the throne, until George III stopped living in it after the death of his wife. There was a fire at Hampton Court in 1986. It is currently owned by Historic Royal Palaces, which also owns places like the Tower of London. It is open to the public. It has many gardens, and also has a maze.

All content from Kiddle encyclopedia articles (including the article images and facts) can be freely used under Attribution-ShareAlike license, unless stated otherwise. Cite this article:
Hampton Court Palace Facts for Kids. Kiddle Encyclopedia.