Kids Encyclopedia Facts
This page is about the mythical creature called dragon. For other meanings of the word, see Dragon (disambiguation). 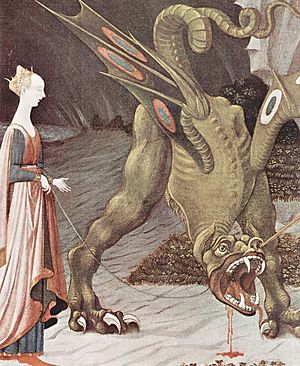 The dragon is a legendary creature belonging to the world of mythology, story telling and fantasy. There are stories about dragons in Chinese culture, European culture, South American culture, and many others.

Dragons can look like dinosaurs and other extinct animals. Because of that, it is easy to think that those animals might have been an example for dragons as they were thought of in the history of humankind.

There are many kinds of dragons in the different cultures. In general:

In stories such as The Hobbit or Beowulf, dragons are dangerous and attack humans. Other stories, such as those by Anne McCaffrey, have dragons who are looking for help, or giving help. A dragon also appears in the Book of Revelation chapters 12-13, where he is seen as the Devil.

All content from Kiddle encyclopedia articles (including the article images and facts) can be freely used under Attribution-ShareAlike license, unless stated otherwise. Cite this article:
Dragon Facts for Kids. Kiddle Encyclopedia.