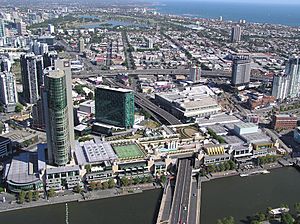 Aerial view of the complex from the north 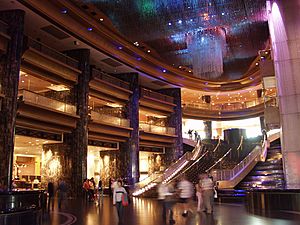 The Atrium at Crown

Crown Melbourne (also referred to as Crown Casino and Entertainment Complex) is a casino and resort located on the south bank of the Yarra River, in Melbourne, Australia. Crown Casino is a unit of Crown Limited, and the first casino of the now-international Crown brand.

Initially having opened in 1994 on the north bank of the Yarra, Crown Melbourne relocated and re–opened on the south bank of the Yarra, in 1997. It remains one of the central features of the Southbank precinct of the Melbourne central business district. The entire complex has a space of 510,000 m²—the equivalent to two city blocks—making it the largest casino complex in the Southern Hemisphere and one of the largest in the world. The complex also hosts four hotels, Crown Towers, Crown Promenade, and Crown Metropol, with a fourth hotel approved for construction which is expected to commence in 2018.

The casino is accessible by tram routes 12, 58, 96, 109 which all pass near Southern Cross railway station and the Melbourne City Centre.

All content from Kiddle encyclopedia articles (including the article images and facts) can be freely used under Attribution-ShareAlike license, unless stated otherwise. Cite this article:
Crown Melbourne Facts for Kids. Kiddle Encyclopedia.