Keanu Charles Reeves (born September 2, 1964) is a Canadian, though born in Lebanon to an English mother and American father. Reeves grew up in Canada, identifies as Canadian, and is Canadian by naturalization. He is an actor, director, producer, and musician. He gained fame for his starring role performances in several blockbuster films, including comedies from the Bill and Ted franchise (1989–1991); action thrillers Point Break (1991), Speed (1994), and the John Wick franchise (2014–2023); and science fiction/action series The Matrix (1999–2003 and 2021). He has also appeared in dramatic films, such as Dangerous Liaisons (1988) and Little Buddha (1993), as well as the romantic horror Bram Stoker's Dracula (1992).

Critics have praised Reeves for his acting. One New York Times journalist said that he displays considerable discipline and range. However, Reeves has spent much of his later career being typecast as a character who saves the world.

His acting has earned him several awards, including a star on the Hollywood Walk of Fame in 2005. 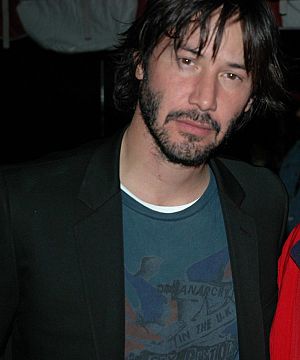 Keanu Charles Reeves was born in Beirut the son of Patricia (née Taylor), a costume designer and performer, and Samuel Nowlin Reeves, Jr. His mother is English and hails from Essex. His father, an American from Hawaii, is of Chinese-Hawaiian, English, Irish, and Portuguese descent.

Reeves moved around the world frequently as a child. After his parents divorced in 1966, his mother became a costume designer and moved the family to Sydney and then to New York City. She married Paul Aaron in 1970 and they divorced in 1971, after moving to Toronto, Ontario. Reeves's mother then married Robert Miller, a rock music promoter. After their divorce, she married a hairdresser named Jack Bond. Grandparents and nannies babysat Reeves and his sisters. A larger portion of Reeves's childhood was spent in the Yorkville neighborhood of Toronto. 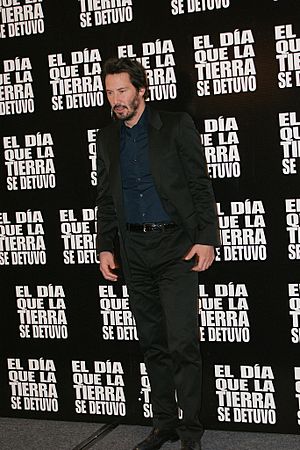 Within five years, Reeves attended four high schools. Reeves was challenged by dyslexia and excelled more in sports than in academics. At De La Salle College (a school for students in grades 5-12), he earned the nickname "The Wall" because of his skill as a hockey goalkeeper. He dreamed of playing ice hockey for Canada, but an injury forced him to look into other career paths. Despite not earning a high school diploma, he attended Avondale Secondary Alternative School while working as an actor.

Reeves began his acting career at the age of nine, appearing in a theater production of Damn Yankees. At 15, he played Mercutio in a stage production of Romeo and Juliet. Reeves dropped out of high school when he was 17. He received a green card through his American stepfather and moved to Los Angeles three years later. He lived with his ex-stepfather, Paul Aaron, who was a stage and television director. Reeves acted on-screen in shows, commercials (one for Coca-Cola), and short films. He worked on stage as well. 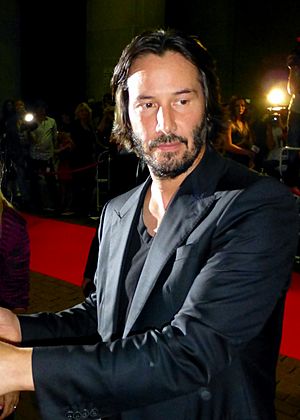 Keanu Reeves at the premiere of Man of Tai Chi, Toronto Film Festival 2013

His first studio movie appearance was Youngblood (1986) in which he played a goalie from Quebec. Shortly after the movie's release, Reeves drove to Los Angeles in his 1969 Volvo. His stepfather had convinced Erwin Stoff in advance to be Reeves's manager and agent. Stoff has remained Reeves's manager and has co-produced many of his films.

After a few minor roles, Reeves received a major role in the 1986 drama film River's Edge. After the success of that film, he starred in other movies aimed at teen audiences: Permanent Record, Bill & Ted's Excellent Adventure, Bill & Ted's Bogus Journey, and Parenthood. 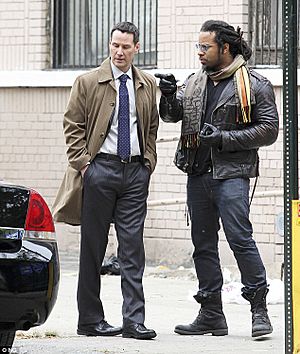 Keanu Reeves on the set of Exposed 2014

During the early 1990s, Reeves started to break out of his teen-film period. He was involved in various lower-budget independent films, including the 1991 film, My Own Private Idaho with River Phoenix. He also appeared in high-budget action films like Point Break and Speed.

In 1999, Reeves starred in the science fiction-action hit The Matrix. It was a box-office success, as were the following two Matrix sequels, The Matrix Reloaded and The Matrix Revolutions.

In 2019, Reeves traveled to São Paulo to produce a Netflix series, Conquest. He also filmed a fourth Matrix film, The Matrix Resurrections, which was released in 2021.

On March 3, 2021, Reeves released the first issue of his new comic book BRZRKR, which is about a mysterious immortal warrior serving as a mercenary for the American government. The series will have 12 comics, which will be made into a Netflix movie starring Reeves as the main character. Currently, there is no official release date set.

Reeves has starred in three John Wick movies, and a fourth is set to release in 2023. 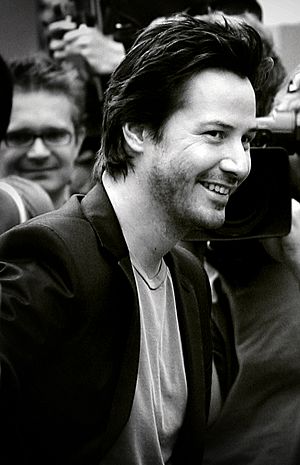 Reeves is allowed to have British citizenship through his English mother. He holds Canadian citizenship by naturalization and an American green card. The reason he had to get one is that only one of his parents is an American citizen.

Reeves is non-religious and has occasionally talked about a belief in God or some other higher power. He has clarified that he has a lot of interest in and respect for Buddhism, which is why he is often described as a Buddhist or atheist.

Reeves is private about his personal life. He lost his girlfriend, Jennifer Syme, in a car accident in 2001, a year after their daughter Ava was stillborn. He is now in a relationship with Alexandra Grant, a visual artist. 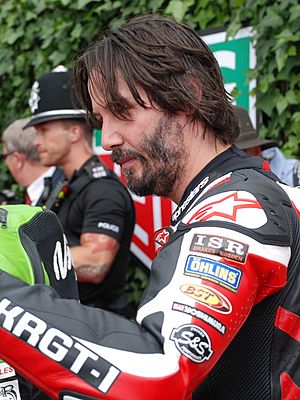 Reeves set up a cancer charity, but he chose not to attach his name to the organization. In 2014, he said in an interview that his sister Kim had battled leukemia for more than a decade. He has also supported PETA, the SickKids Foundation, and Stand Up to Cancer.

In 2017, Reeves, Jessica Fleischmann, and Alexandra Grant founded book publisher, X Artists' Books (also known as XAB). He has written two books: Ode to Happiness and Shadows. They are both written with Grant: He wrote the words to go with her photographs and art.

All content from Kiddle encyclopedia articles (including the article images and facts) can be freely used under Attribution-ShareAlike license, unless stated otherwise. Cite this article:
Keanu Reeves Facts for Kids. Kiddle Encyclopedia.