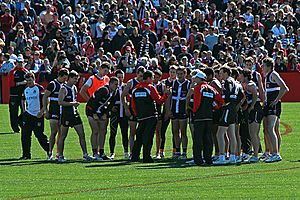 In sports, a coach is a person involved in the direction, instruction and training of the operations of a sports team or of individual sports people. A coach may also be a teacher.

A coach, particularly in a professional league, is usually supported by one or more assistant coaches and specialist support staff. The staff may include coordinators, strength and fitness specialists, and trainers. In elite sport, the role of nutritionists, biomechanists and physiotherapists will all become critical to the overall long-term success of a coach and athlete.

The duties of a coach can vary depending on the level they are coaching at and the country they are coaching in, among others factors. For youth, the primary objective of a coach is to aid players in the development of their technical skills, with emphasis on the enjoyment and fair play of the game rather than physical or tactical development. In recent decades, efforts have been made by governing bodies in various countries to overhaul their coaching structures at youth level with the aim of encouraging coaches to put player development and enjoyment ahead of winning matches.

Many coaching contracts allow the termination of the coach with little notice and without specific cause, usually in the case of high-profile coaches with the payment of a financial settlement. Coaching is a very fickle profession, and a reversal of the team's fortune often finds last year's "Coach of the Year" to be seeking employment in the next. Many coaches are former players of the sport themselves, and coaches of professional sports teams are sometimes retired players.

Successful coaches often become as well or even better-known than the athletes they coach, and in recent years have come to command high salaries and have agents of their own to negotiate their contracts with the teams. Often the head coach of a well-known team has his or her own radio and television programs and becomes the primary "face" associated with the team.

Both the collegiate and professional level coaches may have contracts for millions of dollars a year. The head coach at the pro level has more time to devote to tactics and playbooks, which are combed over by staff that are usually paid more than at the college level. The pro level head coaching, due to the extensive time on the road and long hours, is a very stressful job. 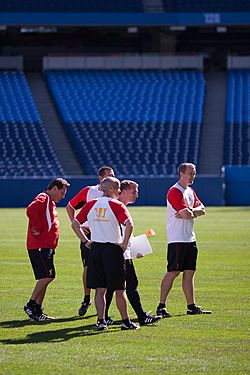 Coaches also often create game plans, or instructions for what their players will do during the game. For every sport, there are different game plans. It is up to the coaches to decide how many players will play a certain position at a time, as long as they do not surpass the maximum amount of players allowed on the playing field at one time. It is also up to the coaches to decide where and when a certain player is going to play.

All content from Kiddle encyclopedia articles (including the article images and facts) can be freely used under Attribution-ShareAlike license, unless stated otherwise. Cite this article:
Coach (sport) Facts for Kids. Kiddle Encyclopedia.