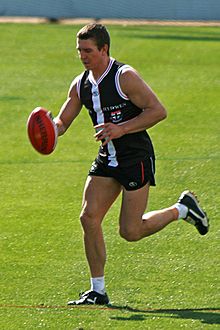 St Kilda Football Club (nicknamed The Saints) is an Australian Rules Football club who play in the Australian Football League. The club first played in 1873. Their home ground is the Etihad Stadium in Melbourne. The team won the 1966 premiership, beating Collingwood. However, they have also placed last 26 times. Their current captain is Nick Riewoldt and their current coach is Alan Richardson. In 2010 they played in the Grand Final and scored a draw with Collingwood. They were defeated in a rematch the next week.

The first mention of a football team in St Kilda was made in 1859. The current club was started in 1873, based on the South Yarra Football Club which had closed the year before. The club joined the new Victorian Football League in 1897, and lost its first 48 games. Their home ground was the Junction Oval, in the Melbourne suburb of St. Kilda. In 1964, the team moved from St Kilda to Moorabbin.

All content from Kiddle encyclopedia articles (including the article images and facts) can be freely used under Attribution-ShareAlike license, unless stated otherwise. Cite this article:
St Kilda Football Club Facts for Kids. Kiddle Encyclopedia.