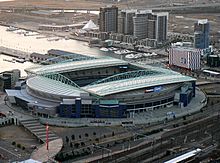 Docklands Stadium, known for sponsorship reasons as Etihad Stadium, is a large sport and entertainment complex built in the Docklands area of Melbourne, Victoria. Since March 1, 2009, is has been named after Etihad Airways of Abu Dhabi, one of two national airlines of the United Arab Emirates. Besides its generic name of Docklands Stadium, it has been known under past naming rights deals as Colonial Stadium and the Telstra Dome. The stadium opened on March 9, 2000 after two years of building and a cost of AU$450 million.

The stadium has a capacity of over 56,000, with over 53,000 seated. It is used mainly for Australian rules football, and houses the headquarters of the sport's main competition, the Australian Football League. It is also used for cricket and major concerts. The stadium also has a large opening roof that allows games to be played in any weather, and also has car parking underneath. It is joined to Southern Cross Railway Station by a footbridge. Its playing surface has an area of 19,000 m2. The roof, the largest opening roof in the Southern Hemisphere, takes about 8 minutes to open or close.

The stadium is home to several Australian Football League clubs, including Carlton, North Melbourne, Essendon, St Kilda, and the Western Bulldogs. It was used for several matches in the 2003 Rugby World Cup.

All content from Kiddle encyclopedia articles (including the article images and facts) can be freely used under Attribution-ShareAlike license, unless stated otherwise. Cite this article:
Docklands Stadium Facts for Kids. Kiddle Encyclopedia.