Edward Christopher "Ed" Sheeran (born 17 February 1991) is an English singer-songwriter and guitarist. He also writes and produces songs on his own and created his label, Paw Print Records. Sheeran is recognized for doing pop music. He was born in Hebden Bridge, West Yorkshire. As a child he lived in Framlingham, Suffolk. He moved to London in 2008 to start a music career. He first played in various events and also made an EP. He then signed a contract with a record company, Atlantic Records. Married to Charlotte Holland.

In 2011 he made his first album, called +. The album went to number one in the music rankings of many countries and had also been certified double platinum. Some of the songs on this album have been successful, such as "The A Team" and "Lego House", (leaked as the third single of the album in November 2011). Also, the song "You Need Me, I Don't Need You" has been released as the second single in August before the album came out. As the fourth single, ‘Drunk’ was out in January 2012. Finally, the song ‘Give me Love’ was released as the sixth and final single of his album +, on November 26th. From this album, his first single "The A Team" has been recently nominated as the ‘Song of the Year’ for the 2013 Grammy Awards. Sheeran was nominated in many categories at the 2013 BRIT Awards.

Don't, Sheeran's #3 song on his album "X" was released in 2014 and was nominated for several awards. The song was about how Ellie Goulding was cheating on him with One Direction's Niall Horan. In the song it says, "it's not like we were both on tour. We were staying on the same hotel floor." Goulding did, in fact, cheat on him while they were staying in the same hotel. Sheeran thought it was very easy to forgive Goulding after he found out about it.

Sheeran has won many prizes, for example the prize for the Best British Male Solo Artist at the 2012 BRIT Awards. He has worked with other singers and groups such as Taylor Swift and One Direction. He recently collaborated with Taylor Swift on her new album Red, by doing a duet with her on the song Everything Has Changed. He has also written songs for One Direction. He wrote the song Moment and gave it to One Direction in 2011. He co-wrote two songs that were on their second album Take Me Home. He first gave them the song Little Things that he had written with his friend Fiona Bevan when he was 17 years-old. He also co-wrote the song Over Again.

In 2005, Sheeran started publishing some EP albums. The first one has been named Orange Room EP. He continued publishing EPs until 2010 when he released Songs I wrote with Amy. It was the last EP released before publishing his album +. 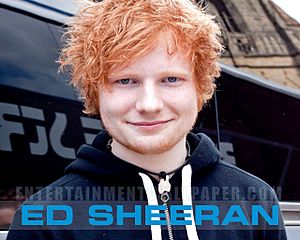 Sheeran performed at the 2012 Olympic Games Closing Ceremony on August 12. He did a cover of the song Wish You Were Here by Pink Floyd.

Sheeran has been spotted smoking several times. In an interview with Ryan Seacrest, published on YouTube on 5 March 2014, he revealed that smoking is his worst habit. After ten years as a smoker, he now claims to be smoke-free. However, in an article published on the Daily Mail website, on 19 March 2015, he was spotted smoking a roll-up cigarette, outside a hotel in Brisbane. He has since quit smoking again.

All content from Kiddle encyclopedia articles (including the article images and facts) can be freely used under Attribution-ShareAlike license, unless stated otherwise. Cite this article:
Ed Sheeran Facts for Kids. Kiddle Encyclopedia.