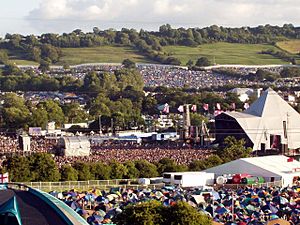 The Glastonbury Festival is a very big music festival. It is held at Worthy Farm near Glastonbury, Somerset, England, most years, during the last weekend in June. About 100,000 people come to the festival every time. The festival is hosted and organized by local farmer Michael Eavis. It is a widely known festival with many big and popular bands playing there every year.

All content from Kiddle encyclopedia articles (including the article images and facts) can be freely used under Attribution-ShareAlike license, unless stated otherwise. Cite this article:
Glastonbury Festival Facts for Kids. Kiddle Encyclopedia.