Beyoncé Giselle Knowles-Carter (born September 4, 1981) is an American singer, songwriter, record producer, dancer, and actress. She was the lead singer of the all-girl R&B group Destiny's Child. She released her first album Dangerously in Love in 2003 when Destiny's Child were on a break. Since then, she has released five more albums, which have all produced hit singles. She is married to rapper JAY-Z and has a daughter named Blue Ivy Carter and twins Sir and Rumi Carter.

She was born and raised in Houston, Texas. Her mother is Tina Knowles (currently Lawson), and her father is Mathew Knowles. Beyoncé has African, French, and Native American ancestry. Knowles went to several performing arts schools, and took part in singing and dancing competitions as a child. Her younger sister, Solange Knowles, is also a singer.

Knowles became very famous in the late 1990s. She became the lead singer of the R&B girl group Destiny's Child. The group became the world's best-selling girl group of all time, selling over 85 million records worldwide.

Destiny's Child took a break from recording music. Knowles released her solo debut album, Dangerously in Love, in 2003. Two singles from the album—"Crazy in Love" and "Baby Boy"—reached number one on the Billboard Hot 100 chart. The album became one of the most successful albums of that year. Dangerously in Love was given five Grammy Awards. After Destiny's Child split, Knowles released her second album. B'Day was released in 2006, and its singles "Déjà Vu", "Irreplaceable" and "Beautiful Liar" reached the top ten in the United States. Her third album I Am... Sasha Fierce was released in 2008. "If I Were a Boy", "Single Ladies (Put a Ring on It)", "Halo" and "Sweet Dreams" became hit singles for Knowles. The album earned six Grammys in 2010. Knowles then became the first female artist to earn that many Grammys in one night. Only Adele would do this again at the 2012 Grammys.

Her next album, 4 (2011), became her fourth number one album on the Billboard 200 chart. She became the third artist in history to have her first four albums debut at number one. Beyoncé released her fifth album Beyoncé on iTunes on December 13, 2013. The public did not know about the album before it was released. The album has fourteen songs and 17 videos. It has been given good reviews. It entered the Billboard 200 at number one. This made her the first female artist in the history of the chart to have her first five albums enter the chart at the top. Knowles performed "Drunk in Love" with Jay Z at the 2014 Grammy Awards. She was nominated for Best Rap/Sung Collaboration for "Part II (On the Run)” with Jay Z.

In February 2016, Beyoncé was a guest performer at Super Bowl 50. She performed "Formation", the lead single from her sixth studio album, Lemonade. The performance was controversial, as it had elements of the #BlackLivesMatter movement along with influences from the Black Panthers. She announced The Formation World Tour, her current stadium concert tour, after the Super Bowl performance.

In April 2016, an hour-long film, Lemonade, was shown on HBO. After the film aired, the Lemonade album was released. It features "Formation" and the second single, "Sorry".

Her first role in a movie was for the musical Carmen: A Hip Hopera (2001). Her first major movie was Austin Powers in Goldmember (2002). The movie Dreamgirls (2006) was nominated for two Golden Globe Awards. Her other movies Cadillac Records (2008) and Obsessed (2009) did not do so well.

In 2005, Knowles and her mother created a fashion line called House of Deréon.

In 2016, she also introduced a fitness-wear collection called Ivy Park.

She became a spokesperson for L'Oréal, Pepsi, Tommy Hilfiger, Nintendo, and Vizio.

Many of Knowles' recordings and movies were given many nominations, with many winning them. These include 20 Grammy Awards, 24 MTV Video Music Awards, three American Music Awards, a Billboard Millennium Award, and a star on the Hollywood Walk of Fame with Destiny's Child. In 2009, Billboard named her the Top Radio Songs Artist of the 2000s decade. They also ranked her 4th for Artist of the Decade. The Recording Industry Association of America (RIAA), named Knowles as the Top Certified Artist of the 2000s. In the US, she has sold over 17 million copies as of May 2014. She has sold more than 30.4 million digital singles as of January 2012. While worldwide, she has sold 245 million records worldwide. This makes her one of the best-selling music artists of all time. Knowles appeared on VH1's 2010 list of the "100 Greatest Artists of All Time". They ranked her third on their "100 Greatest Women in Music" list in 2012. 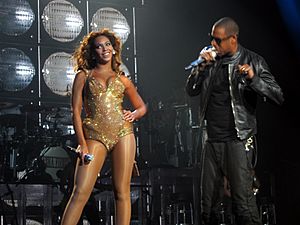 Beyoncé performing on the I Am... World Tour with Jay-Z, whom she married in 2008

Beyoncé started a relationship with Jay-Z after their collaboration on "'03 Bonnie & Clyde", which appeared on his seventh album The Blueprint 2: The Gift & The Curse (2002). Beyoncé appeared as Jay-Z's girlfriend in that music video for the song. As of April 2014[update], the couple had sold a combined 300 million records together. They are known for their private relationship, although they have appeared to become more relaxed in recent years.

All content from Kiddle encyclopedia articles (including the article images and facts) can be freely used under Attribution-ShareAlike license, unless stated otherwise. Cite this article:
Beyoncé Facts for Kids. Kiddle Encyclopedia.