Keys was born on January 25, 1981, in Hell's Kitchen, Manhattan, New York City, New York. Her birth name is Alicia Augello Cook. She is the only child of Teresa Augello, a paralegal and part-time actress, and Craig Cook, a flight attendant. Her mother is of half Italian and half English, Irish, and Scottish ancestry, and her father is of African American ancestry. Keys has expressed that she was comfortable with her mixed race heritage because she felt she was able to "relate to different cultures".

Alicia Keys is half Black, half White. She identifies herself as African American. She grew up in a Black neighborhood. Her music has primarily jazz, blues or piano interludes. 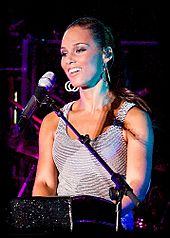 All content from Kiddle encyclopedia articles (including the article images and facts) can be freely used under Attribution-ShareAlike license, unless stated otherwise. Cite this article:
Alicia Keys Facts for Kids. Kiddle Encyclopedia.