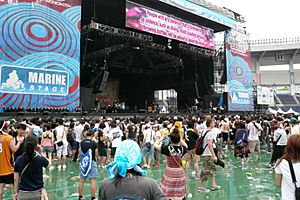 The Summer Sonic Festival is a music festival in Japan. It is in Chiba and Osaka for three days in summer. It is planned and run by Creativeman Production.

In 2000, Creativeman Production planned a music festival at its 10th year anniversary of the company. They named it "Summer Sonic Festival," and held it at Yamanashi and Osaka. In 2001, they changed the event site, Yamanashi, to Chiba, because it was difficult to make a big stage in Yamanashi. In 2003, all of the tickets were sold out for the first time. It is considered to be the reason why all of the tickets were sold out is that famous UK bands, Blur and Radiohead, performed that year. In 2009, the festival was held for three days for the first time to celebrate its 10th festival. In addition, the number of artists who participated became approximately 180, and it was the most ever since the festival was held. On August 26 and 27, 2017, The festival was held in Shanghai for the first time. In 2020, the festival was cancelled because Tokyo Olympics and paralympics were going to be held at Makuhari Messe. However, the festival was held online as SUMMER SONIC 2020 ARCHIVE FESTIVAL. Moreover, on 19 to 21, September Super Sonic was going to be held as an alternative event, but no one knows when artists will be able to enter Japan due to COVID-19, so it was postponed to 2020.

In 2000, the festival was held in SOUNDCONIFER229, Fuji-Q Highland, Yamanashi, and WTC Openair stadium, Osaka. Ever since 2001, the team running the festival changed the event site, Yamanashi, to Makuhari Messe and Chiba Marine Stadium, Chiba.

The first headliners of Summer Sonic Festival are The Jon Spencer Blues Explosion(JSBX) and Green Day. In 2003, Blur and Radiohead. In 2009, My Chemical Romance , Linkin Park and Beyonce. In 2014, Queen + Adam Lambert, and Chemical Brothers. In 2017, LUNA SEA and Travis. Actually, Placebo, a UK band, was going to perform, but they could not come to Japan. So Travis performed instead of Placebo. In 2019, Red Hot Chili Peppers, B’z, and The Chainsmokers.

All content from Kiddle encyclopedia articles (including the article images and facts) can be freely used under Attribution-ShareAlike license, unless stated otherwise. Cite this article:
Summer Sonic Festival Facts for Kids. Kiddle Encyclopedia.