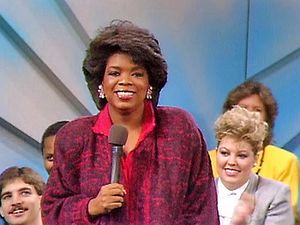 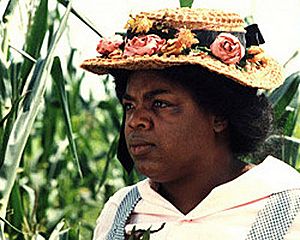 Winfrey as Sofia in The Color Purple.

Oprah Gail Winfrey (born Orpah, January 29, 1954) is an American media executive, actress, talk show host, television producer and philanthropist. She is best known for her talk show The Oprah Winfrey Show, which was the highest-rated television program of its kind in history and was nationally syndicated from 1986 to 2011 in Chicago. Dubbed the "Queen of All Media", she was the richest African American of the 20th century and North America's first black multi-billionaire, and has been ranked the greatest black philanthropist in American history. She has also been sometimes ranked as the most influential woman in the world.

Winfrey was born into poverty in rural Mississippi to a teenage single mother and later raised in inner-city Milwaukee.

Winfrey landed a job in radio while still in high school. By 19, she was a co-anchor for the local evening news.

Winfrey's often emotional, extemporaneous delivery eventually led to her transfer to the daytime talk show arena, and after boosting a third-rated local Chicago talk show to first place, she launched her own production company and became internationally syndicated.

Credited with creating a more intimate confessional form of media communication, Winfrey popularized and revolutionized the tabloid talk show genre pioneered by Phil Donahue. Through this medium, Winfrey broke 20th-century taboos and allowed LGBT people to enter the mainstream through television appearances. In 1994, she was inducted into the National Women's Hall of Fame.

By the mid-1990s, Winfrey had reinvented her show with a focus on literature, self-improvement, mindfulness and spirituality. Though she was criticized for unleashing a confession culture, promoting controversial self-help ideas, and having an emotion-centered approach, she has also been praised for overcoming adversity to become a benefactor to others.

She has also acted in several movies including The Color Purple and The Butler.

Winfrey had also emerged as a political force in the 2008 presidential race, delivering about one million votes to Barack Obama in the razor close 2008 Democratic primary. In 2013, Winfrey was awarded the Presidential Medal of Freedom by President Obama and honorary doctorate degrees from Duke and Harvard.

In 2008, she formed her own network, Oprah Winfrey Network (OWN).

Winfrey was born on January 29, 1954 in Kosciusko, Mississippi. Winfrey was named "Orpah" after a character in the Book of Ruth. People made the mistake of calling her "Oprah". She decided to keep this name. Her parents are Vernita Lee, a maid, and Vernon Winfrey, a barber. She went to Tennessee State University in 1971. She started to work in radio and television in Nashville. She hosted television programs in Baltimore and Chicago.

In 1986, Winfrey's own talk show The Oprah Winfrey Show went on the air. She was liked by audiences for her warmth. She came to own the show. 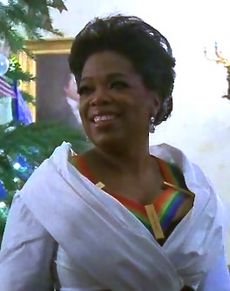 Winfrey at the White House for the 2010 Kennedy Center Honors

Winfrey and her boyfriend Stedman Graham have been together since 1986. They were engaged to be married in November 1992, but the ceremony never took place.

She endorsed Barack Obama in 2006 for the 2008 election. One estimate said it delivered one million votes in the 2008 Democratic primary race.

Oprah Winfrey has a lot of money. She gives to many charities. She gives to girls' education in South Africa. In 2013, she was named one of the 400 richest people in the United States. She is the only African-American among this group. She was awarded the Presidential Medal of Freedom by President Barack Obama in 2013 and a honorary doctorate degree from Harvard. 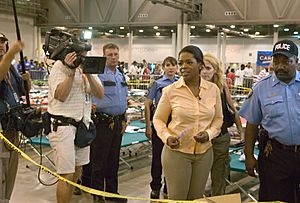 In 2004, Winfrey became the first black person to rank among the 50 most generous Americans and she remained among the top 50 until 2010. By 2012, she had given away about $400 million to educational causes.

As of 2012, Winfrey had also given over 400 scholarships to Morehouse College in Atlanta, Georgia. Winfrey was the recipient of the first Bob Hope Humanitarian Award at the 2002 Emmy Awards for services to television and film. To celebrate two decades on national TV, and to thank her employees for their hard work, Winfrey took her staff and their families (1,065 people in total) on vacation to Hawaii in the summer of 2006.

In 2013, Winfrey donated $12 million to the Smithsonian’s National Museum of African American History and Culture. President Barack Obama awarded her the Presidential Medal of Freedom later that same year.

In 1998, Winfrey created the Oprah's Angel Network, a charity that supported charitable projects and provided grants to nonprofit organizations around the world. Oprah's Angel Network raised more than $80,000,000 ($1 million of which was donated by Jon Bon Jovi). Winfrey personally covered all administrative costs associated with the charity, so 100% of all funds raised went to charity programs.

In the wake of Hurricane Katrina, Oprah created the Oprah Angel Network Katrina registry which raised more than $11 million for relief efforts. Winfrey personally gave $10 million to the cause. Homes were built in Texas, Mississippi, Louisiana, and Alabama before the one-year anniversary of Hurricanes Katrina and Rita.

In 2004, Winfrey and her team filmed an episode of her show, Oprah's Christmas Kindness, in which Winfrey travelled to South Africa to bring attention to the plight of young children affected by poverty and AIDS. During the 21-day trip, Winfrey and her crew visited schools and orphanages in poverty-stricken areas, and distributed Christmas presents to 50,000 children, with dolls for the girls and soccer balls for the boys, and school supplies.

Throughout the show, Winfrey appealed to viewers to donate money to Oprah's Angel Network for poor and AIDS-affected children in Africa. From that show alone, viewers around the world donated over $7,000,000. Winfrey invested $40 million and some of her time establishing the Oprah Winfrey Leadership Academy for Girls in Henley on Klip south of Johannesburg, South Africa.

The school set over 22 acres, opened in January 2007 with an enrollment of 150 pupils (increasing to 450) and features state-of-the-art classrooms, computer and science laboratories, a library, theatre, and beauty salon. Nelson Mandela praised Winfrey for overcoming her own disadvantaged youth to become a benefactor for others. Winfrey teaches a class at the school via satellite.

All content from Kiddle encyclopedia articles (including the article images and facts) can be freely used under Attribution-ShareAlike license, unless stated otherwise. Cite this article:
Oprah Winfrey Facts for Kids. Kiddle Encyclopedia.