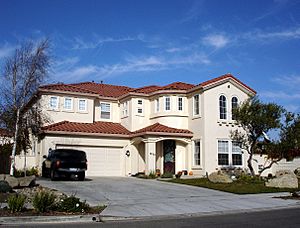 A millionaire (originally and sometimes still millionaire) is person whose net worth or wealth is at least one million units of a currency (most of the times it will be U.S. dollar). Millionaires are on average 61 years old with $3.05 in value. This includes things like the stock market or real estate, not just money. As of 2008, there were 10 million people in the world who are classified as U.S.-dollar millionaires. Another commonly used term is multimillionaire. This is used to call a persona having two or more millions of assets. In financial world the word multimillionaire is used to categorize person with $30 Million of assets or more. They are also called high net worth individuals.

All content from Kiddle encyclopedia articles (including the article images and facts) can be freely used under Attribution-ShareAlike license, unless stated otherwise. Cite this article:
Millionaire Facts for Kids. Kiddle Encyclopedia.