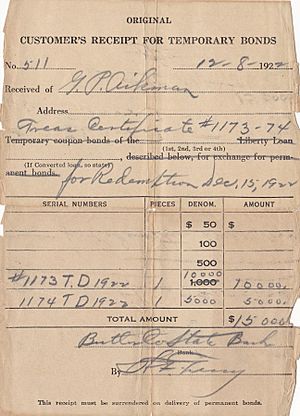 A bond is a contract between two companies. Simply put, a bond is a receipt given by a government or organization as an agreement to borrow money from another organization which will be returned at a later date with certain amount of interest or increment.

Companies or governments issue bonds because they need to borrow large amounts of money. They issue bonds and investors buy them (thereby giving the people who issued the bond money).

Bonds have a maturity date. This means that at some point, the bond issuer has to pay back the money to the investors. They also have to pay the investors a little bit more than they paid for the bond.

Bonds are usually traded through brokers and are part of a financial instrument group called Fixed Income. Banks and financial institutions offer loans on different terms against the security of assets. 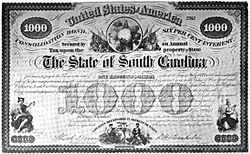 Bond certificate for the state of South Carolina issued in 1873 under the state's Consolidation Act.

Railroad obligation of the Moscow-Kiev-Voronezh railroad company, printed in Russian, Dutch and German.

The following descriptions are not mutually exclusive, and more than one of them may apply to a particular bond: 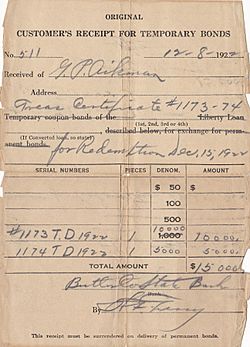 All content from Kiddle encyclopedia articles (including the article images and facts) can be freely used under Attribution-ShareAlike license, unless stated otherwise. Cite this article:
Bond (finance) Facts for Kids. Kiddle Encyclopedia.