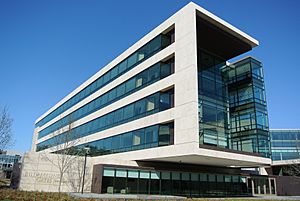 Philanthropy is doing something for the public good to improve other people's lives. A person who does that is called a philanthropist. Philanthropy often involves donating money for things that need to be done.

The word "philanthropy" comes from Greek words that mean "love of humanity". President of Uruguay, José Mujica donates 90% of his salary to charity. This is an example of philanthropy.

Today philanthropy is used for public good, focusing on quality of life. People owning big business donates their salary to charities such as Bill Gates, Mark Zuckerberg, and Ted Turner.

All content from Kiddle encyclopedia articles (including the article images and facts) can be freely used under Attribution-ShareAlike license, unless stated otherwise. Cite this article:
Philanthropy Facts for Kids. Kiddle Encyclopedia.