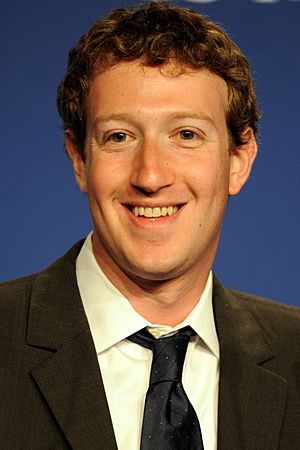 Mark Zuckerberg (born May 14, 1984) is a former Harvard University student who created Facebook when he was still studying computer science. The founding of Facebook made Zuckerberg a billionaire, one of the youngest ever and richest youngest billionaire according to Forbes magazine. Besides computer programming, Zuckerberg is also interested in foreign language. Zuckerberg was born in White Plains, New York but now he lives in California. His founding of Facebook was portrayed in the movie The Social Network. In 2010, he said that he was going to give most of his money to charity. In 2010, he was also named Time's Person of the Year. He was raised Jewish, but is now an atheist. He is married to Priscilla Chan.

Zuckerberg began using computers and writing software in middle school. His father taught him Atari BASIC Programming in the 1990s, and later hired software developer David Newman to tutor him privately. Zuckerberg took a graduate course in the subject at Mercy College near his home while still in high school. In one program, since his father's dental practice was operated from their home, he built a software program he called "ZuckNet" that allowed all the computers between the house and dental office to communicate with each other. It is considered a "primitive" version of AOL's Instant Messenger, which came out the following year.

According to writer Jose Antonio Vargas, "some kids played computer games. Mark created them." Zuckerberg himself recalls this period: "I had a bunch of friends who were artists. They'd come over, draw stuff, and I'd build a game out of it." However, notes Vargas, Zuckerberg was not a typical "geek-klutz", as he later became captain of his prep school fencing team and earned a classics diploma. Napster co-founder Sean Parker, a close friend, notes that Zuckerberg was "really into Greek odysseys and all that stuff", recalling how he once quoted lines from the Roman epic poem Aeneid, by Virgil, during a Facebook product conference.

During Zuckerberg's high school years, he worked under the company name Intelligent Media Group to build a music player called the Synapse Media Player. The device used machine learning to learn the user's listening habits, which was posted to Slashdot and received a rating of 3 out of 5 from PC Magazine.

On February 4, 2004, Zuckerberg launched Facebook from his Harvard dormitory room. An earlier inspiration for Facebook may have come from Phillips Exeter Academy, the prep school from which Zuckerberg graduated in 2002. It published its own student directory, "The Photo Address Book", which students referred to as "The Facebook". Such photo directories were an important part of the student social experience at many private schools. With them, students were able to list attributes such as their class years, their friends, and their telephone numbers.

Once at college, Zuckerberg's Facebook started off as just a "Harvard thing" until Zuckerberg decided to spread it to other schools, enlisting the help of roommate Dustin Moskovitz. They began with Columbia University, New York University, Stanford, Dartmouth, Cornell, University of Pennsylvania, Brown, and Yale. Samyr Laine, a triple jumper representing Haiti at the 2012 Summer Olympics, shared a room with Zuckerberg during Facebook's founding. "Mark was clearly on to great things," said Laine, who was Facebook's fourteenth user.

Zuckerberg, Moskovitz and some friends moved to Palo Alto, California in Silicon Valley where they leased a small house that served as an office. Over the summer, Zuckerberg met Peter Thiel, who invested in the company. They got their first office in mid-2004. According to Zuckerberg, the group planned to return to Harvard, but eventually decided to remain in California. They had already turned down offers by major corporations to buy the company. In an interview in 2007, Zuckerberg explained his reasoning: "It's not because of the amount of money. For me and my colleagues, the most important thing is that we create an open information flow for people. Having media corporations owned by conglomerates is just not an attractive idea to me."

He restated these goals to Wired magazine in 2010: "The thing I really care about is the mission, making the world open." Earlier, in April 2009, Zuckerberg sought the advice of former Netscape CFO Peter Currie about financing strategies for Facebook. On July 21, 2010, Zuckerberg reported that the company reached the 500 million-user mark.

In a 2011 interview with PBS shortly after the death of Steve Jobs, Zuckerberg said that Jobs had advised him on how to create a management team at Facebook that was "focused on building as high quality and good things as you are". 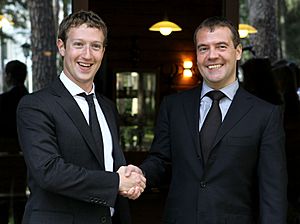 Zuckerberg and Russian President Dmitry Medvedev during their meeting at the Russian leader's residence outside Moscow, October 1, 2012

On October 1, 2012, Zuckerberg visited Russian Prime Minister Dmitry Medvedev in Moscow to stimulate social media innovation in Russia and to boost Facebook's position in the Russian market. Russia's communications minister tweeted that Prime Minister Dmitry Medvedev urged the social media giant's founder to abandon plans to lure away Russian programmers and instead consider opening a research center in Moscow. In 2012, Facebook had roughly 9 million users in Russia, while domestic clone VK had around 34 million.

On August 19, 2013, The Washington Post reported that Zuckerberg's Facebook profile was hacked by an unemployed web developer.

At the 2013 TechCrunch Disrupt conference, held in September, Zuckerberg stated that he is working towards registering the 5 billion humans who were not connected to the Internet as of the conference on Facebook. Zuckerberg then explained that this is intertwined with the aim of the Internet.org project, whereby Facebook, with the support of other technology companies, seeks to increase the number of people connected to the internet.

Zuckerberg was the keynote speaker at the 2014 Mobile World Congress (MWC), held in Barcelona, Spain, in March 2014, which was attended by 75,000 delegates. Various media sources highlighted the connection between Facebook's focus on mobile technology and Zuckerberg's speech, claiming that mobile represents the future of the company. Zuckerberg's speech expands upon the goal that he raised at the TechCrunch conference in September 2013, whereby he is working towards expanding Internet coverage into developing countries.

Alongside other American technology figures like Jeff Bezos and Tim Cook, Zuckerberg hosted visiting Chinese politician Lu Wei, known as the "Internet czar" for his influence in the enforcement of China's online policy, at Facebook's headquarters on December 8, 2014. The meeting occurred after Zuckerberg participated in a Q&A session at Tsinghua University in Beijing, China, on October 23, 2014, where he attempted to converse in Mandarin Chinese; although Facebook is banned in China, Zuckerberg is highly regarded among the people and was at the university to help fuel the nation's burgeoning entrepreneur sector.

Zuckerberg fielded questions during a live Q&A session at the company's headquarters in Menlo Park on December 11, 2014. The founder and CEO explained that he does not believe Facebook is a waste of time, because it facilitates social engagement, and participating in a public session was so that he could "learn how to better serve the community".

Zuckerberg receives a one-dollar salary as CEO of Facebook. In June 2016, Business Insider named Zuckerberg one of the "Top 10 Business Visionaries Creating Value for the World" along with Elon Musk and Sal Khan, due to the fact that he and his wife "pledged to give away 99% of their wealth — which is estimated at over $52.1 billion." 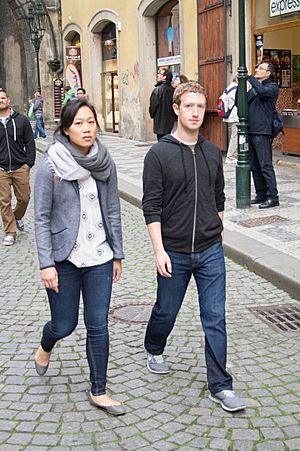 Zuckerberg donated an undisclosed amount to Diaspora, an open-source personal Web server that implements a distributed social networking service. He called it a "cool idea".

Zuckerberg founded the Start-up: Education foundation. On September 22, 2010, it was reported that Zuckerberg had donated $100 million to Newark Public Schools, the public school system of Newark, New Jersey. Critics noted the timing of the donation as being close to the release of The Social Network, which painted a somewhat negative portrait of Zuckerberg. Zuckerberg responded to the criticism, saying, "The thing that I was most sensitive about with the movie timing was, I didn't want the press about The Social Network movie to get conflated with the Newark project. I was thinking about doing this anonymously just so that the two things could be kept separate." Newark Mayor Cory Booker stated that he and New Jersey Governor Chris Christie had to convince Zuckerberg's team not to make the donation anonymously. The money was largely wasted, according to journalist Dale Russakoff.

On December 9, 2010, Zuckerberg, Bill Gates, and investor Warren Buffett signed "The Giving Pledge", in which they promised to donate to charity at least half of their wealth over the course of time, and invited others among the wealthy to donate 50 percent or more of their wealth to charity.

In December 2012, Zuckerberg and his wife Priscilla Chan announced that over the course of their lives they would give the majority of their wealth to "advancing human potential and promoting equality" in the spirit of The Giving Pledge. On December 1, 2015, they announced they would eventually give 99 percent of their Facebook shares (worth about US$45 billion at the time) to the Chan Zuckerberg Initiative.

On December 19, 2013, Zuckerberg announced a donation of 18 million Facebook shares to the Silicon Valley Community Foundation, to be executed by the end of the month—based on Facebook's valuation as of then, the shares totaled $990 million in value. On December 31, 2013, the donation was recognized as the largest charitable gift on public record for 2013. The Chronicle of Philanthropy placed Zuckerberg and his wife at the top of the magazine's annual list of 50 most generous Americans for 2013, having donated roughly $1 billion to charity.

In October 2014, Zuckerberg and his wife Priscilla Chan donated US$25 million to combat the Ebola virus disease, specifically the West African Ebola virus epidemic. in 2016, the Chan Zuckerberg Initiative announced that it would give $600 million to Biohub a location in San Francisco's Mission Bay District near the University of California, San Francisco, to allow for easy interaction and collaboration between scientists at UCSF; University of California, Berkeley; Stanford University.

On December 1, 2015, Zuckerberg and Chan announced the birth of their first daughter Max, and in an open letter to Max, they pledged to donate 99 percent of their Facebook shares, then valued at US$45 billion, to the Chan Zuckerberg Initiative, their new organization that will focus on health and education. The donation will not be given immediately, but over the course of their lives. However, instead of forming a charitable corporation to donate the value of the stock to, as Bill Gates, Warren Buffett, Larry Page, Sergey Brin and other tech billionaires have done, Zuckerberg and Chan chose to use the structure of a limited liability company. This has drawn criticism from a number of journalists.

Chan and Zuckerberg also signed The Giving Pledge. On August 28, 2017, the couple announced the birth of their second daughter.

Zuckerberg met his future wife, fellow student Priscilla Chan, at a fraternity party during his sophomore year at Harvard. They began dating in 2003.

In September 2010, Zuckerberg invited Chan, by then a medical student at the University of California, to move into his rented Palo Alto house. Zuckerberg studied Mandarin in preparation for the couple's visit to China in December 2010. On May 19, 2012, Zuckerberg and Chan married in Zuckerberg's backyard in an event that also celebrated her graduation from medical school. On July 31, 2015, Zuckerberg announced that he and Chan were expecting a baby girl. He said he felt confident that the risk of miscarrying was low so far into the pregnancy, after Chan had already suffered three miscarriages. On December 1, Zuckerberg announced the birth of their daughter, Maxima Chan Zuckerberg ("Max"). The couple announced on their Chinese New Year video, published on February 6, 2016, that Maxima's official Chinese name is Chen Mingyu. They welcomed their second daughter, August, in August 2017.

All content from Kiddle encyclopedia articles (including the article images and facts) can be freely used under Attribution-ShareAlike license, unless stated otherwise. Cite this article:
Mark Zuckerberg Facts for Kids. Kiddle Encyclopedia.