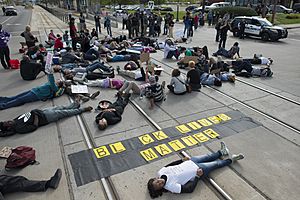 Black Lives Matter (BLM for short) is an international activist group. They originated in the African-American community. They are against violence and systemic racism toward black people.

The movement began in 2013 with the hashtag #BlackLivesMatter on social media, after the acquittal of George Zimmerman in the death of Trayvon Martin. They became famous for their street demonstrations, following the deaths of Michael Brown and Eric Garner. The earlier sparked riots and unrest in Ferguson, Missouri. The latter sparked protests all over the United States.

All content from Kiddle encyclopedia articles (including the article images and facts) can be freely used under Attribution-ShareAlike license, unless stated otherwise. Cite this article:
Black Lives Matter Facts for Kids. Kiddle Encyclopedia.