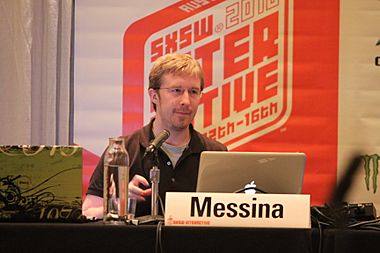 Chris Messina, the inventor of the hashtag

A hashtag is a type of metadata tag used on social networks such as Twitter and other microblogging services, allowing users to apply dynamic, user-generated tagging which makes it possible for others to easily find messages with a specific theme or content. Users create and use hashtags by placing the number sign or pound sign # usually in front of a word or unspaced phrase in a message. The hashtag may contain letters, digits, and underscores. Searching for that hashtag will yield each message that has been tagged with it. A hashtag archive is consequently collected into a single stream under the same hashtag. For example, on the photo-sharing service Instagram, the hashtag #bluesky allows users to find all the posts that have been tagged using that hashtag.

The use of hashtags was first proposed by Chris Messina in a 2007 tweet, that, although initially decried by Twitter as a "thing for nerds" eventually led to their use rapidly becoming widespread throughout the platform. Messina, who made no attempt to copyright the use because he felt "they were born of the internet, and owned by no one", has subsequently been credited as the godfather of the hashtag. By the end of the decade hashtags could be seen in most emerging as well as established social media platforms including Instagram, Facebook, Reddit, and YouTube — so much so that Instagram had to officially place a "30 hashtags" limit on its posts to prevent people from abusing their use, a limit which Instagrammers eventually circumvented by posting hashtags in the comments section of their posts. As of 2018 more than 85% of the top 50 websites by traffic on the Internet use hashtags and their use is common by millennials, Gen Z, politicians, influencers, and celebrities worldwide. Because of its widespread use, hashtag was added to the Oxford English Dictionary in June 2014. The term hashtag is sometimes erroneously used to refer to the hash symbol itself when used in the context of a hashtag. Formal taxonomies can be developed from the folk taxonomy rendered machine-readable by the markup that hashtags provide. This process is called folksonomy.

The number sign or hash symbol "#" is often used in information technology to highlight a special meaning. (The symbol is also called a "pound sign" in the US, and "hash" in the UK) In 1970, for example, the number sign was used to denote immediate address mode in the assembly language of the PDP-11 when placed next to a symbol or a number. In 1978, Brian Kernighan and Dennis Ritchie used # in the C programming language for special keywords that had to be processed first by the C preprocessor. In the 1986 SGML standard, ISO 8879:1986 (q.v.), # is a reserved name indicator (rni) which precedes keyword syntactic literals, --e.g., the primitive content token #PCDATA, used for parsed character data.

The International Telecommunication Union (ITU) approved in November 1988 recommendation E.161 that put the pound sign on the right side of the 0 in the 4 x 3 button arrangement for push buttons on telephones. This same arrangement is still used today in most software phones (see Android dialer for example). The ITU recommendation had 2 design options for the pound sign: a European version where the hash sign was built with a 90-degree angle and a North-American version with an 80-degree angle. The North-American version seems to have prevailed as most pound signs in Europe now follow the 80-degree inclination.

The pound sign was adopted for use within internet relay chat (IRC) networks circa 1988 to label groups and topics. Channels or topics that are available across an entire IRC network are prefixed with a hash symbol # (as opposed to those local to a server, which use an ampersand '&').

The use of the pound sign in IRC inspired Chris Messina to propose a similar system to be used on Twitter to tag topics of interest on the microblogging network. He posted the first hashtag on Twitter:

How do you feel about using # (pound) for groups. As in #barcamp [msg]?

Messina’s suggestion to use the hashtag was not adopted by Twitter, but the practice took off after hashtags were widely used in tweets relating to the 2007 San Diego forest fires in Southern California.

According to Messina, he suggested use of the hashtag to make it easy for "lay" users to search for content and find specific relevant updates; they were for people who do not have the technological knowledge to navigate the site. Therefore, the hashtag "was created organically by Twitter users as a way to categorize messages." Today they are for anyone, either with or without technical knowledge, to easily impose enough annotation to be useful without needing a more formal system or adhering to many technical details.

Internationally, the hashtag became a practice of writing style for Twitter posts during the 2009–2010 Iranian election protests; Twitter users inside and outside Iran used both English- and Persian-language hashtags in communications during the events.

The first published use of the term "hash tag" was in a blog post by Stowe Boyd, "Hash Tags = Twitter Groupings," on August 26, 2007, according to lexicographer Ben Zimmer, chair of the American Dialect Society's New Words Committee.

Beginning July 2, 2009, Twitter began to hyperlink all hashtags in tweets to Twitter search results for the hashtagged word (and for the standard spelling of commonly misspelled words). In 2010, Twitter introduced "Trending Topics" on the Twitter front page, displaying hashtags that are rapidly becoming popular. Twitter has an algorithm to tackle attempts to spam the trending list and ensure that hashtags trend naturally. Although the hashtag started out most popularly on Twitter as the main social media platform for this use, the use has extended to other social media sites including Instagram, Facebook, Flickr, Tumblr, and Google+.

All content from Kiddle encyclopedia articles (including the article images and facts) can be freely used under Attribution-ShareAlike license, unless stated otherwise. Cite this article:
Hashtag Facts for Kids. Kiddle Encyclopedia.