Internet Relay Chat (IRC) is a chat system on the Internet. It allows people from around the world to have conversations together, but it can also be used for two people to chat privately.

The IRC chat rooms are also called IRC channels. These channels are on IRC servers, which you can connect to by finding that server's information. This information will often begin with "irc," then a period, the name of the server, then another period, and finally, .com .org or .net. An example would be 'irc.[Servername].org' 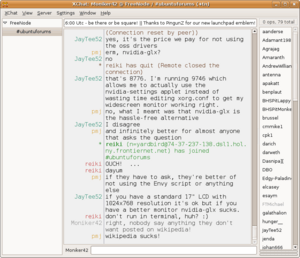 A Screenshot of XChat, a cross-platform IRC client.

IRC is an open protocol that uses TCP and optionally TLS. An IRC server can connect to other IRC servers to expand the IRC network. Users access IRC networks by connecting a client to a server. There are many client and server programs, such as mIRC and the Bahamut IRCd, respectively. Most IRC servers do not require users to log in, but a user will have to set a nickname before being connected.

IRC was originally a plain text protocol (although later extended), which on request was assigned port 194/TCP by IANA. However, most servers now run IRC on 6667/TCP and nearby port numbers (for example TCP ports 6112-6119) so that the server does not have to be run with root privileges.

This is a list of some programs that allow users to connect to IRC.

All content from Kiddle encyclopedia articles (including the article images and facts) can be freely used under Attribution-ShareAlike license, unless stated otherwise. Cite this article:
Internet Relay Chat Facts for Kids. Kiddle Encyclopedia.