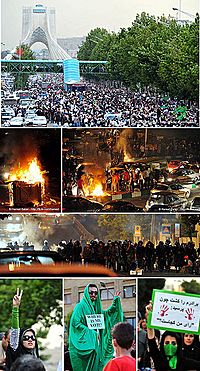 Pictures of the protests

Protests began the night of 12 June 2009. Ahmadinejad called the protests a little more than "passions after a soccer match".

The Iranian government confirmed the deaths of 36 people during the protests, while unconfirmed reports by Mousavi supporters allege at least 72 deaths (over twice as many) in the three months following the election.

All content from Kiddle encyclopedia articles (including the article images and facts) can be freely used under Attribution-ShareAlike license, unless stated otherwise. Cite this article:
2009 Iranian presidential election protests Facts for Kids. Kiddle Encyclopedia.