Kids Encyclopedia Facts
This page is about the social networking service. For the company which owns and operates it, see Twitter, Inc..
"Tweeting" and "Tweeted" redirect here. For the animal behavior, see Bird vocalization.

Twitter is an online social media and social networking service owned and operated by American company Twitter, Inc., on which users send and respond publicly or privately 280-character-long messages, images and videos known as "tweets". Registered users can tweet, like, 'retweet' tweets and direct message (DM), while unregistered users only have the ability to view public tweets. Users interact with Twitter through browser or mobile frontend software, or programmatically via its APIs.

Twitter was created by Jack Dorsey, Noah Glass, Biz Stone, and Evan Williams in March 2006 and launched in July of that year. Twitter, Inc. is based in San Francisco, California and has more than 25 offices around the world. By 2012[update], more than 100 million users tweeted 340 million tweets a day, and the service handled an average of 1.6 billion search queries per day. In 2013, it was one of the ten most-visited websites and has been described as "the SMS of the Internet". By the start of 2019[update], Twitter had more than 330 million monthly active users. In practice, the vast majority of tweets are tweeted by a minority of users. In 2020, it was estimated that approximately 48 million accounts (15% of all accounts) were fake.

On December 20, 2022, Musk announced he would step down as CEO once a replacement had been found. 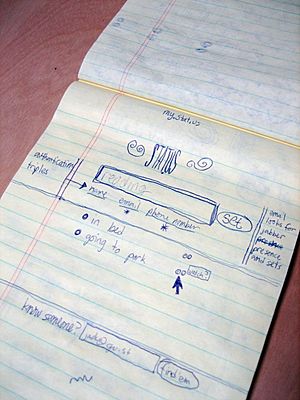 Jack Dorsey, then an undergraduate student at New York University, introduced the idea of an individual using an SMS service to communicate with a small group. The original project code name for the service was twttr, an idea that Williams later ascribed to Noah Glass, inspired by Flickr and the five-character length of American SMS short codes.

The first Twitter prototype, developed by Dorsey and contractor Florian Weber, was used as an internal service for Odeo employees. The full version was introduced publicly on July 15, 2006. Twitter spun off into its own company in April 2007. 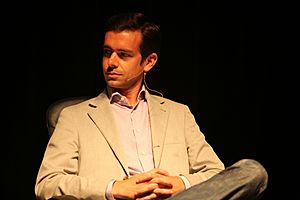 Twitter's usage spikes during prominent events. For example, a record was set during the 2010 FIFA World Cup when fans wrote 2,940 tweets per second in the thirty-second period after Japan scored against Cameroon on June 14, 2010. The record was broken again when 3,085 tweets per second were posted after the Los Angeles Lakers' victory in the 2010 NBA Finals on June 17, 2010, and then again at the close of Japan's victory over Denmark in the World Cup when users published 3,283 tweets per second. The record was set again during the 2011 FIFA Women's World Cup Final between Japan and the United States, when 7,196 tweets per second were published. When American singer Michael Jackson died on June 25, 2009, Twitter servers crashed after users were updating their status to include the words "Michael Jackson" at a rate of 100,000 tweets per hour. The current record as of August 3, 2013, was set in Japan, with 143,199 tweets per second during a television screening of the movie Castle in the Sky (beating the previous record of 33,388, also set by Japan for the television screening of the same movie).

The first unassisted off-Earth Twitter message was posted from the International Space Station by NASA astronaut T. J. Creamer on January 22, 2010. By late November 2010, an average of a dozen updates per day were posted on the astronauts' communal account, @NASA_Astronauts. NASA has also hosted over 25 "tweetups", events that provide guests with VIP access to NASA facilities and speakers with the goal of leveraging participants' social networks to further the outreach goals of NASA.

From September through October 2010, the company began rolling out "New Twitter", an entirely revamped edition of twitter.com. On April 5, 2011, Twitter tested a new homepage and phased out the "Old Twitter".

In April 2014, Twitter underwent a redesign that made the site resemble Facebook somewhat, with profile picture and biography in a column left to the timeline.

In 2019, Twitter released another redesign of its user interface and ended support for TLS 1.0 and 1.1 connections.

In June 2022, Twitter announced a partnership with e-commerce giant Shopify, and its plans to launch a sales channel app for U.S. Shopify merchants.

Business magnate Elon Musk began speaking of buying Twitter, Inc. in early 2022, stating his concerns with the company's commitment to free speech and whether Twitter's moderation policies were undermining democracy.

Musk made an offer to buy Twitter, Inc. for $43 billion on April 14, 2022. Musk completed the acquisition on October 27, 2022, for $44 billion and immediately fired the top three Twitter executives. About a week later, he began laying off about half of the company's approximately 7,500 employees.

On December 20, 2022, Musk announced he would step down as CEO once a replacement had been found, and that he would then run the software and servers teams.

In 2009, Twitter was mainly used by older adults who might not have used other social sites before Twitter. According to a study by Sysomos in June 2009, women make up a slightly larger Twitter demographic than men—53% over 47%. It also stated that 5% of users accounted for 75% of all activity and that New York City has more Twitter users than other cities.

In 2012, the country with the most active users on Twitter was the United States. A 2016 Pew research poll found that Twitter is used by 24% of all online US adults. It was equally popular with men and women (24% and 25% of online Americans respectively), but more popular with younger (36% of 18–29 year olds) generations.

A 2019 survey conducted by the Pew Foundation found that Twitter users are more likely than the general public to have both a college degree and higher income than the average U.S. adult. Users are also three times as likely to be younger than 50 years old, with the median age of adult U.S. users being 40 years old. The survey found that 10% of users who are most active on Twitter are responsible for 80% of all tweets, focusing mainly on the topics of politics and women.

User accounts with large follower base

A selfie orchestrated by 86th Academy Awards host Ellen DeGeneres during the March 2, 2014, broadcast was at the time the most retweeted image ever. DeGeneres said she wanted to pay homage to Meryl Streep's record 17 Oscar nominations by setting a new record with her, and invited other Oscar celebrities to join them. The resulting photo of twelve celebrities broke the previous retweet record within forty minutes, and was retweeted over 1.8 million times in the first hour. By the end of the ceremony it had been retweeted over 2 million times. On May 9, 2017, Ellen's record was broken by Carter Wilkerson (@carterjwm) by collecting nearly 3.5 million retweets in a little over a month. This record was broken when Yusaku Maezawa announced a giveaway on Twitter in January 2019, accumulating 4.4 million retweets. A similar tweet he made in December 2019 was retweeted 3.8 million times.

The most tweeted moment in the history of Twitter occurred on August 2, 2013; during a Japanese television airing of the Studio Ghibli film Castle in the Sky, fans simultaneously tweeted the word balse (バルス)—the incantation for a destruction spell used during its climax, after it was uttered in the film. There was a global peak of 143,199 tweets in one second, beating the previous record of 33,388.

The most discussed event in Twitter history occurred on October 24, 2015; the hashtag ("#ALDubEBTamangPanahon") for Tamang Panahon, a live special episode of the Filipino variety show Eat Bulaga! at the Philippine Arena, centering on its popular on-air couple AlDub, attracted 41 million tweets. The most-discussed sporting event in Twitter history was the 2014 FIFA World Cup semi-final between Brazil and Germany on July 8, 2014.

According to Guinness World Records, the fastest pace to a million followers was set by actor Robert Downey Jr. in 23 hours and 22 minutes in April 2014. This record was later broken by Caitlyn Jenner, who joined the site on June 1, 2015, and amassed a million followers in just 4 hours and 3 minutes.

Twitter has been adopted as a communication and learning tool in educational and research settings mostly in colleges and universities. Research has found that using Twitter in college courses helps students communicate with each other and faculty, promotes informal learning, allows shy students a forum for increased participation, increases student engagement, and improves overall course grades.

Twitter has been an increasingly growing in the field of education, as an effective tool that can be used to encourage learning and idea, or knowledge sharing, in and outside the classroom. By using or creating hashtags, students and educators are able to communicate under specific categories of their choice, to enhance and promote education. A broad example of a hashtag used in education is "edchat", to communicate with other teachers, and people using that hashtag. Once teachers find someone they want to talk to, they can either direct message the person, or narrow down the hashtag to make the topic of the conversation more specific using hashtags for scichat (science), engchat (English), sschat (social studies).

In a 2011 study, researchers found that young peoples use of Twitter helped to improve relationships with teachers, encourage interactive learning, and ultimately lead to high grades. In the same study it was found that out of a group of 158 educators, 92% agreed that the reason they use Twitter is because of how user friendly it is, another 86% agreed that they started and continue using Twitter because of how easy it is to learn, and finally, 93% said they use Twitter because it is free. People found that sifting through large amounts of data is challenging, however, with the simple nature of Twitter large amount of information became easily accessible. Much of this simplicity comes from the use of the hashtag, and the intuitive nature of how Twitter as a microblogging site operates. These features help to promote education outside the classroom in a global setting where students and educators are easily able to create, connect, and share knowledge. This ultimately promotes growth and learning among students and educators, not just in the classroom, but virtually and around the world.

All content from Kiddle encyclopedia articles (including the article images and facts) can be freely used under Attribution-ShareAlike license, unless stated otherwise. Cite this article:
Twitter Facts for Kids. Kiddle Encyclopedia.