Bastrop ( BASS-trəp -trop) is a city and the county seat of Bastrop County, Texas, United States. Located about 30 miles (48 km) southeast of Austin, it is part of the Greater Austin metropolitan area. The population was 7,218 according to the 2010 census.

The Colorado River through Bastrop.

Bastrop is located near the center of Bastrop County along the Colorado River. The downtown business district of the city is located on a bluff on the east bank of the river, but the city extends to the west side of the river as well. According to the United States Census Bureau, the city has a total area of 9.1 square miles (23.6 km2), of which 9.0 square miles (23.3 km2) is land and 0.12 square miles (0.3 km2), or 1.23%, is water.

Three miles (5 km) northeast of the town, Lake Bastrop is a 906-acre (3.67 km2) reservoir on Spicer Creek operated by the Lower Colorado River Authority (LCRA) since its impounding in 1964. Although primarily used as a cooling pond for the Sim Gideon Power Plant, the lake is also used for recreation, and the LCRA maintains two public parks on the lake.

Several movies were at least partially filmed in Bastrop, including Lovin' Molly (1974), Home Fries (1998), Courage Under Fire (1996), and the 2004 remake of The Alamo. Other projects include All The Boys Love Mandy Lane (2006) and Fireflies in the Garden (2008), starring Willem Dafoe and Julia Roberts. Recently, the remake of Friday the 13th was also partially filmed in Bastrop. Filmed in and near Bastrop: The Life of David Gale with Kevin Spacey and Kate Winslet; Michael 1996 With John Travolta, Andie MacDowell and William Hurt; Hope Floats 1998 With Sandra Bullock, Harry Connick Jr.; True Women 1998 (TV movie) with Angelina Jolie, Dana Delany, and Michael York; The Tree of Life 2010 with Brad Pitt and Sean Penn. Bernie 2010 with Jack Black, Shirley MacLaine, and Matthew McConaughey.

Also partially filmed near Bastrop on the Buck Steiner Ranch was A Perfect World with Kevin Costner, Clint Eastwood and Laura Dern. In late 2012 and early 2013, the film Joe Ransom starring Nicolas Cage was partially filmed in Bastrop at the Lost Pines Boy Scout Park. Prince Avalanche (2013) starring Paul Rudd and Emile Hirsch was shot in Bastrop, Texas, after the Bastrop County Complex fire. Boyhood (2014) starring Patricia Arquette and Ethan Hawke was shot in the Lost Pines of Bastrop.

Bastrop tends to be cooler than other central Texas cities, but can reach 100 °F in the summer. Extreme temperatures range from -1 °F to 111 °F. 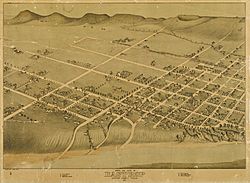 Spanish soldiers lived temporarily at the current site of Bastrop as early as 1804, when a fort was established where the Old San Antonio Road crossed the Colorado River and named Puesta del Colorado.

Bastrop's namesake, Felipe Enrique Neri, Baron de Bastrop, was a commoner named Philip Hendrik Nering Bogel, who was wanted for embezzlement in his native country of the Netherlands. In Texas, he assisted Moses and Stephen F. Austin in obtaining land grants in Texas and served as S. F. Austin's land commissioner. In 1827, Stephen F. Austin located one hundred families in an area adjacent to his earlier Mexican contracts. Austin arranged for Mexican officials to name a new town there after the baron who died the same year. 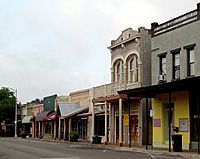 On June 8, 1832, the town was platted along conventional Mexican lines, with a square in the center and blocks set aside for public buildings. The town was named Bastrop, but two years later the Coahuila y Tejas legislature renamed it Mina in honor of Francisco Javier Mina, a Mexican revolutionary hero, and martyr. The town was incorporated under the laws of the Republic of Texas on December 18, 1837, and the name was changed back to Bastrop.

Overlooking the center of the town is the Lost Pines Forest. Composed of loblolly pines (Pinus taeda), the forest is the center of the westernmost stand of the southern pine forest. As the only timber available in the area, the forest contributed to the local economy. Bastrop began supplying Austin with lumber in 1839 and then San Antonio, the western Texas frontier, and parts of Mexico.

A fire in 1862 destroyed most of downtown Bastrop's commercial buildings and the county courthouse. As a result, most current downtown structures postdate the Civil War. In 1979, the National Register of Historic Places admitted 131 Bastrop buildings and sites to its listings. This earned Bastrop the title of the "Most Historic Small Town in Texas".

On September 4, 2011, two wildfires started when trees fell on power lines. The first fire started in the community of Circle D-KC Estates near Bastrop State Park, and the other fire started approximately 4 miles (6 km) north. The two fires merged into the Bastrop County Complex fire. On September 6, two lives were lost as well as 600 homes with 0% containment. On September 7, firefighters on the ground were able to get 30% containment. On September 11, fire crews had the fire 50% contained and had already lost more than 1,500 homes. On September 17, light rainfall in the area helped fire crews fight the flames. The fire was 85% contained. The fire burned until October 10 when fire officials declared the fire 100% contained. This was the worst and most destructive wildfire in Texas history as it destroyed 1,691 homes, killed two people, and caused $325 million of insured property damage. The drought in Texas at the time combined with strong winds from the Gulf of Mexico caused by Tropical Storm Lee helped fuel the fire.

All content from Kiddle encyclopedia articles (including the article images and facts) can be freely used under Attribution-ShareAlike license, unless stated otherwise. Cite this article:
Bastrop, Texas Facts for Kids. Kiddle Encyclopedia.