Its drainage basin and some of its usually dry tributaries extend into New Mexico. It flows generally southeast from Dawson County through Ballinger, Marble Falls, Austin, Bastrop, Smithville, La Grange, Columbus, Wharton, and Bay City before emptying into the Gulf of Mexico at Matagorda Bay. 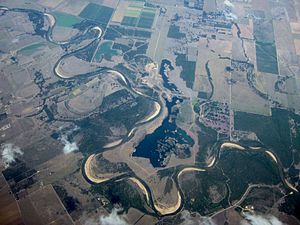 Oblique air photo of the Colorado River where it crosses from Colorado County into Wharton County near Nada.

The Colorado River originates south of Lubbock, on the Llano Estacado, near Lamesa. It flows generally southeast, out of the Llano Estacado and through the Texas Hill Country, through several reservoirs including Lake J.B. Thomas, E.V. Spence Reservoir, and Lake O.H. Ivie. The river flows through several more reservoirs before reaching Austin, including Lake Buchanan, Inks Lake, Lake Lyndon B. Johnson, commonly referred to as Lake LBJ and Lake Travis. The Llano River joins the Colorado at Lake LBJ near Kingsland. The Pedernales River joins the Colorado at Lake Travis near Briarcliff. After passing through Austin, the Colorado River continues flowing southeast until emptying into Matagorda Bay on the Gulf of Mexico, near Matagorda. The Texas waterway is not connected to, nor part of, the longer and more well-known Colorado River that originates in Colorado, flows through Utah and Nevada, created the Grand Canyon and Lake Mead, and marks the entire length of the state line separating Arizona and California.

The upper Colorado River was controlled by Comanches from the early 18th century to the late 19th century. In 1757, Spanish Texas attempted to establish an outlying Catholic mission on the San Saba River, near its confluence with the Colorado River. Nearly defenseless and viewed by the Comanche tribe as a territorial invasion, the mission was sacked in 1758 by about 2,000 Comanches and their allies. The Comanche were not effectively challenged on the upper Colorado River for nearly a century.

The river is an important source of water for farming, cities, and electrical power production. Major man-made reservoirs on the river include Lake Buchanan, Inks Lake, Lake LBJ, Lake Marble Falls, Lake Travis, Lake Austin, and Lady Bird Lake in Austin. Collectively, these lakes are known as the Highland Lakes. In addition to power plants operating on each of the major lakes, waters of the Colorado are used for cooling the South Texas Nuclear Project, near Bay City. The Colorado River Municipal Water District owns and operates three reservoirs upstream of the Highland Lakes, Lake J. B. Thomas near Snyder, E.V. Spence Reservoir near Robert Lee, and O. H. Ivie Reservoir near Ballinger.

Main page: List of tributaries of the Colorado River (Texas)

All content from Kiddle encyclopedia articles (including the article images and facts) can be freely used under Attribution-ShareAlike license, unless stated otherwise. Cite this article:
Colorado River (Texas) Facts for Kids. Kiddle Encyclopedia.