Lady Bird Lake (formerly, and still colloquially referred to as Town Lake) is a river-like reservoir on the Colorado River in Austin, Texas, United States. The City of Austin created the reservoir in 1960 as a cooling pond for a new city power plant. The lake, which has a surface area of 416 acres (168 ha), is now used primarily for recreation and flood control. The reservoir is named in honor of former First Lady of the United States Lady Bird Johnson.

Lady Bird Lake is the easternmost lake of a chain of reservoirs on the river, which is completely located in Texas, and should not be confused with the larger Colorado River located in the Southwestern United States. This chain, known locally as the Texas Highland Lakes, also includes Lake Buchanan, Inks Lake, Lake LBJ, Lake Marble Falls, Lake Travis, and Lake Austin.

The City of Austin constructed Longhorn Dam in 1960 to form Town Lake. The city needed the reservoir to serve as a cooling pond for the Holly Street Power Plant, which operated from 1960 until 2007.

Before 1971, the shoreline of Town Lake was mostly a mixture of weeds, unkempt bushes, and trash. Local television station KTBC referred to the lake as an "eyesore". Some concerned Austinites led small projects to clean up the lake. Roberta Crenshaw, chair of the Austin Board of Parks and Recreation, purchased nearly 400 trees and shrubs in an effort to spearhead parkland development around the lake. During his two terms in office (1971–75), the Mayor of Austin Roy Butler led the Austin City Council to establish the Town Lake Beautification Committee, and he appointed Lady Bird Johnson as the project's honorary chairman. Johnson's involvement brought attention and money (including $19,000 of her own) to the Town Lake project, allowing for the planting of hundreds of shrubs and trees. The city also built a system of hike and bike trails along the shoreline of the lake.

On July 26, 2007, the Austin City Council passed a controversial resolution authorizing the renaming of the reservoir from Town Lake to Lady Bird Lake in honor of Lady Bird Johnson, who had died earlier that month. Johnson had declined the honor of having the lake renamed for her while she was alive. In renaming the lake, the City Council recognized Johnson's dedication to beautifying the lake and her efforts to create a recreational trail system around the lake's shoreline.

In 2009, non-profit organization Keep Austin Beautiful launched "Clean Lady Bird Lake". The program mobilizes thousands of community volunteers annually to conduct large-scale cleanups along the lake every other month and targeted cleanups throughout the year. 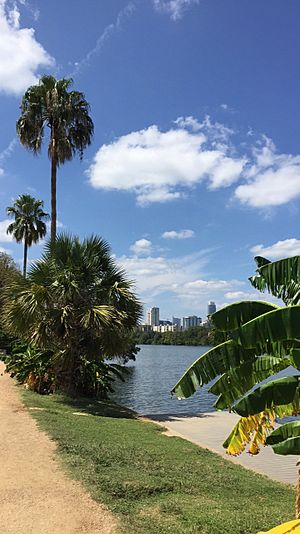 View of Lady Bird Lake and the Downtown skyline seen from the East Riverside neighborhood.

Lady Bird Lake is a major recreation area for the City of Austin. The lake's banks are bounded by the Ann and Roy Butler Hike-and-Bike Trail, and businesses offer recreational watercraft services along the lakefront portion of the trail. Austin's largest downtown park, Zilker Park, is adjacent to the lake, and Barton Springs, a major attraction for swimmers, flows into the lake.

Other water sports along the shores of the lake include swimming in Deep Eddy Pool, the oldest swimming pool in Texas, and Barton Springs Pool, a natural pool on Barton Creek which flows into Lady Bird Lake. Below Tom Miller Dam is Red Bud Isle, a small island formed by the 1900 collapse of the McDonald Dam that serves as a recreation area with a dog park and access to the lake for canoeing and fishing.

Swimming in Lady Bird Lake is illegal not due to poor water quality from the run-off from area streets, which is a false rumor, but rather due to several drownings as well as debris in the water from bridges and dams destroyed by floods in years past. The City of Austin enacted the ban in 1964, and the fine can be up to $500.

Music venues on the banks of Lady Bird Lake are home to a number of events year-round, including the Austin City Limits Music Festival in the fall, the Austin Reggae Festival and Spamarama in the spring, and many open-air concerts at Auditorium Shores on the south bank and Fiesta Gardens on the north bank. The Austin Aqua Festival was held on the shores of Lady Bird Lake from 1962 until 1998. The late Austin resident and blues guitar legend, Stevie Ray Vaughan played a number of concerts at Auditorium Shores and is honored with a memorial statue on the south bank. 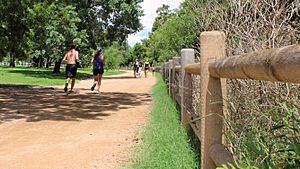 Many Austinites take advantage of the Butler Trail to keep fit by walking, running or cycling.

The Ann and Roy Butler Hike-and-Bike Trail, formerly the Town Lake Hike and Bike Trail, creates a complete circuit around Lady Bird Lake. It is one of the oldest urban Texas hike and bike paths. The trail is the longest trail designed for non-motorized traffic maintained by the City of Austin Parks and Recreation Department. A local nonprofit, The Trail Foundation, is the Trail's private steward and has made Trail-wide improvements by adding user amenities and infrastructure including trailheads and lakefront gathering areas, locally-designed jewel box restrooms, exercise equipment, as well as doing trailwide ecological restoration work on an ongoing basis. The Butler Trail loop was completed in 2014 with the public-private partnership 1-mile Boardwalk project, which was spearheaded by The Trail Foundation.

The trail is 10.1 miles (16.3 km) long and mostly flat, with 97.5% of it at less than an 8% grade. The trail's surface is smooth and is mostly crushed granite except for a few lengths of concrete and a boardwalk on the South-side of the lake. A pedestrian bridge incorporated into the trail bridges Barton Creek. The Roberta Crenshaw Pedestrian Walkway spans Lady Bird Lake beneath MoPac Boulevard and provides the trail's westernmost crossing of Lady Bird Lake.

Lady Bird Lake has been stocked with several species of fish intended to improve the utility of the reservoir for recreational fishing. The predominant fish species in Lady Bird Lake are largemouth bass, catfish, carp, and sunfish. Fishing is regulated, requiring a fishing license, and daily bag and length limits apply for most species.

All content from Kiddle encyclopedia articles (including the article images and facts) can be freely used under Attribution-ShareAlike license, unless stated otherwise. Cite this article:
Lady Bird Lake Facts for Kids. Kiddle Encyclopedia.