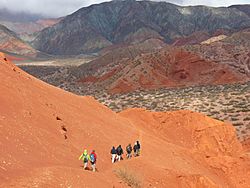 A trail in Argentina. 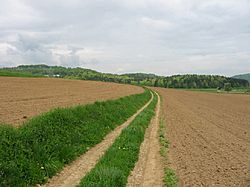 A country trail in Slovenia. 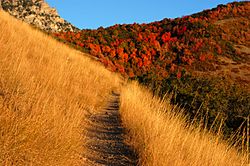 A trail is a pedestrian path or road mainly used for walking, but often also for cycling, cross-country skiing or other activities. Some trails are off-limits to everyone other than hikers, and few trails allow motorized vehicles.

In the United States, the word footpath is also used to mean a trail; however in Australian English, New Zealand English, Indian English, and Irish English this word means "sidewalk" (American English) or "pavement" (British English).

In Australia, the word track can be used interchangeably with trail, and can refer to anything from a dirt road to a pedestrian walkway (generally also unpaved). The term "trail" gained popularity during World War II, when many servicemen from the United States were stationed in Australia, which probably influenced its being adopted by elements of the Australian media at the time (see Kokoda Track). In New Zealand, the word track is used almost exclusively except in reference to cross-country skiing, where trail is used.

Trail types and use 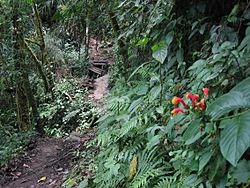 Trail use has become very popular for a wide variety of users. Some trails are meant as nature trails, and are used by people learning about the natural world. Many trails are day trails, what means that they are generally used by people out for a short hike, less than a day. Some trails are backpacking trails, or long-distance trails, and are used by both day hikers and by backpackers. Some of the trails are over a thousand miles (1,500 km) long and may be hiked in sections by backpackers, or completed in one trip by dedicated hikers. Some trails are specifically used by other outdoor enthusiasts to gain access to another feature, such as good climbing sites. Many runners also favor running on trails rather than pavement, as giving a more vigorous work-out and better developing agility skills, as well as providing a more pleasant exercise environment. See trail running. 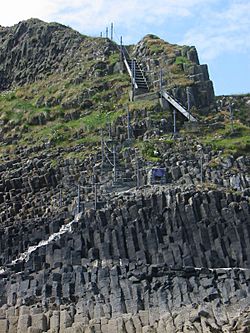 Stairs to the top of the Isle of Staffa, Scotland

Recent decades have seen an explosion of interest in cycling, both street-type and off-road type. A common term for these facilities is simply "bike trail". These trails may be built to a different set of standards than foot trails, requiring more stable, harder surfaces, less strenuous grades, longer sight visibility, and less sharp changes in direction. On the other hand, the cross-slope of a bike trail may be significantly greater than a foot trail, and the actual treadway may be narrower in some cases.

In cross-country skiing, a trail (also called a 'track' or 'piste') refers to the parallel grooves cut into the snow, one for each ski.

Motorized trail use also remains very popular with some people. Such terms as ORV, four-wheeling, all-terrain vehicle, and others actually have highly specific meanings.

All content from Kiddle encyclopedia articles (including the article images and facts) can be freely used under Attribution-ShareAlike license, unless stated otherwise. Cite this article:
Trail Facts for Kids. Kiddle Encyclopedia.