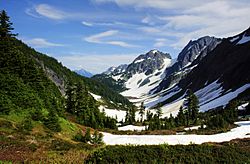 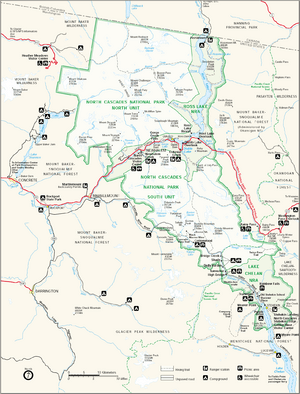 North Cascades National Park is a national park in the U.S. state of Washington. It was established on 2 October 1968. The park covers 634,000 acres of the Cascade Range (specifically the North Cascades).

North Cascades National Park features the rugged mountain peaks of the North Cascades Range. This is the most expansive glacial system in the mainland United States. The Park also has the headwaters of numerous waterways, and vast forests with the highest degree of flora biodiversity of any US national park.

The region was first settled by Paleo-Indian Native Americans. By the time white explorers arrived it was inhabited by Skagit tribes.

All content from Kiddle encyclopedia articles (including the article images and facts) can be freely used under Attribution-ShareAlike license, unless stated otherwise. Cite this article:
North Cascades National Park Facts for Kids. Kiddle Encyclopedia.