The sooty grouse (Dendragapus fuliginosus) is a species of forest-dwelling grouse native to North America's Pacific Coast Ranges. It is closely related to the dusky grouse (Dendragapus obscurus), and the two were previously considered a single species, the blue grouse.

Adults have a long square tail, light gray at the end. Adult males are mainly dark with a yellow throat air sac surrounded by white, and a yellow wattle over the eye during display. Adult females are mottled brown with dark brown and white marks on the underparts.

Their breeding habitat is the edges of conifer and mixed forests in mountainous regions of western North America, from southeastern Alaska and Yukon south to California. Their range is closely associated with that of various conifers. The nest is a scrape on the ground concealed under a shrub or log. 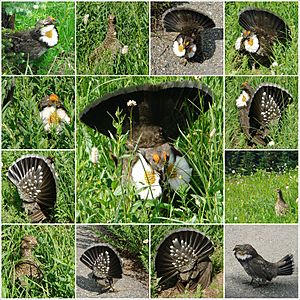 They are permanent residents but move short distances by foot and short flights to denser forest areas in winter, with the odd habit of moving to higher altitudes in winter.

These birds forage on the ground, or in trees in winter. In winter, they mainly eat fir and douglas-fir needles, occasionally also hemlock and pine needles; in summer, other green plants (Pteridium, Salix), berries (Gaultheria, Mahonia, Rubus, Vaccinium), and insects (particularly ants, beetles, grasshoppers) are more important. Chicks are almost entirely dependent on insect food for their first ten days.

Males sing with deep hoots on their territory and make short flapping flights to attract females. Females leave the male's territory after mating.

Sooty grouse are experiencing some population decline from habitat loss at the southern end of its range in southern California.

All content from Kiddle encyclopedia articles (including the article images and facts) can be freely used under Attribution-ShareAlike license, unless stated otherwise. Cite this article:
Sooty grouse Facts for Kids. Kiddle Encyclopedia.