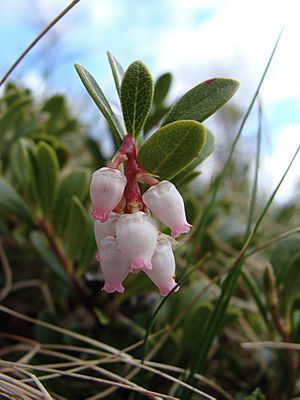 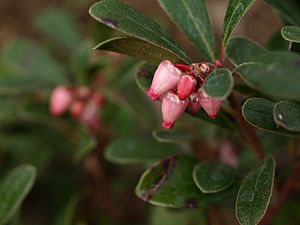 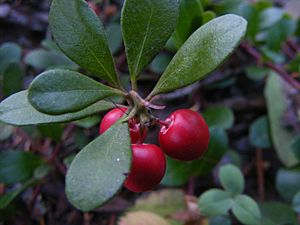 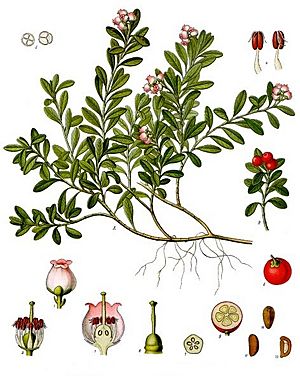 Arctostaphylos uva-ursi is a plant species of the genus Arctostaphylos widely distributed across circumboreal regions of the subarctic Northern Hemisphere. Kinnikinnick (First Nations for "smoking mixture") is a common name in Canada and the United States. It is one of several related species referred to as bearberry.

Its specific name uva-ursi means "grape of the bear" in Latin (ūva ursī), similar to the meaning of the generic epithet Arctostaphylos ("bear grapes").

The genus name of Arctostaphylos uva-ursi comes from the Greek words arctos (meaning bear) and staphyle (meaning "bunch of grapes") in reference to the fruits which form grape-like clusters. In the wild, the fruits are commonly eaten by bears. The specific epithet, uva-ursi, comes from the Latin words uva (meaning grape) and ursus (bear), reflected by the bearberry nickname.

The common name, kinnikinnick, is an Algonquin word meaning "smoking mixture". Native Americans and early pioneers smoked the dried uva-ursi leaves and bark alone or mixed with other herbs, tobacco or dried dogwood bark in pipes. Numerous common names exist, depending on region, such as mealberry, sandberry, mountain-box, fox-plum, hog-crawberry, and barren myrtle.

The distribution of Arctostaphylos uva-ursi is circumpolar, and it is widespread in northern latitudes, but confined to high altitudes further south:

Arctostaphylos uva-ursi is a small procumbent woody groundcover shrub 5–30 cm (2–12 in) high. The leaves are evergreen, remaining green for 1–3 years before falling. The fruit is a red berry.

The leaves are shiny, small, and feel thick and stiff. They are alternately arranged on the stems. Undersides of leaves are lighter green than on the tops. New stems can be red if the plant is in full sun, but are green in shadier areas. Older stems are brown. In spring, they have white or pink flowers.

The simple leaves of this broadleaf evergreen are alternately arranged on branches. Each leaf is held by a twisted leaf stalk, vertically. The leathery dark green leaves are an inch long and have rounded tips tapering back to the base. In fall, the leaves begin changing from a dark green to a reddish-green to purple, becoming pale on the underside.

Terminal clusters of small urn-shaped flowers bloom from May to June. The flowers are white to pink, and bear round, fleshy or mealy, bright red to pink fruits called drupes. The smooth, glossy skinned fruits range from 1⁄4 to 1⁄2 inch (6 to 13 mm) in diameter. The fruit persist on the plant into early winter. The fruits are bittersweet when raw, but sweeter when boiled and dried. Fruits are edible for humans, but are generally considered to be unpalatable. Each drupe contains 1 to 5 hard seeds, which need to be scarified and stratified prior to germination to reduce the seed coat and break embryo dormancy. There is an average of 40,900 cleaned seeds per pound. It is a fire-tolerant species and may be a seedbanking species.

Bears and other animals eat the berries.

Arctostaphylos uva-ursi is an alternate host for spruce broom rust.

There are some 14 subspecies, including:

Historically, bearberry fruits and leaves were used by the Blackfeet Nation as food. The fruits are fairly bland when raw but can be used to make jelly. The berries were used as seasoning and cooked with meat.

Teas and extracts of the leaves have been used in traditional medicine of First Nations people over centuries as urinary tract antiseptics, diuretics, and laxatives. In herbalism, leaf tea is used to treat urinary tract inflammation.

There are several cultivars that are propagated for use as ornamental plants. It is an attractive year-round evergreen groundcover for gardens, and is useful for controlling erosion on hillsides and slopes due to its deep roots. It is tolerant of sun and dry soils, and is thus common groundcover in urban areas, in naturalized areas, and in native plant or rock gardens.

All content from Kiddle encyclopedia articles (including the article images and facts) can be freely used under Attribution-ShareAlike license, unless stated otherwise. Cite this article:
Arctostaphylos uva-ursi Facts for Kids. Kiddle Encyclopedia.