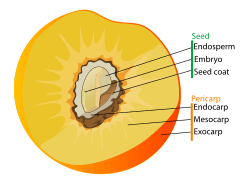 Diagram of a typical drupe (peach), showing both fruit and seed 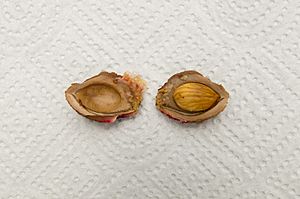 The seed inside the stone of a peach 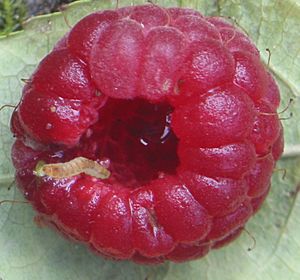 A raspberry fruit is an aggregate fruit. It is made of many drupelets.

A stone fruit, also called a drupe, is a fruit with a large "stone" inside. The stone is sometimes called the seed, but that is a mistake, as the seed is inside the stone. The stones can also be called pits. Examples of stone fruits are peaches, nectarines, plums, lychees, mangoes, and cherries. These fruits are edible and used frequently in cooking.

As with all fruits, what the ordinary person talks about is often very different from what a botanist understands. Not all drupes have single large stones. Rasberries are a good example. To see their stones, the fruit has to be carefully broken open. Then the tiny stones can be seen inside. They are called stones because the seeds keep their covering (called an endocarp), not because they are large and hard.

The many small round parts that make up a raspberry each have a similar structure with a very small pit inside. The small parts are called drupelets, meaning little drupes.

The boundary between a drupe and a berry is not always clear. Thus, some sources describe the fruit of species of the genus Persea, which includes the avocado, as a drupe, others describe avocado fruit as a berry. One definition of berry requires the endocarp to be less than 2 mm (3⁄32 in) thick, other fruits with a stony endocarp being drupes. In marginal cases, terms such as drupaceous or drupe-like may be used.

The term stone fruit (also stonefruit) can be a synonym for drupe or, more typically, it can mean just the fruit of the genus Prunus.

Clingstone refers to a drupe having a stone which cannot easily be removed from the flesh. The flesh is attached strongly to the stone and must be cut to free the stone. Clingstone varieties of fruits in the genus Prunus are preferred as table fruit and for jams, because the flesh of clingstone fruits tends to be more tender and juicy throughout.

Tryma is a specialized term for such nut-like drupes that are difficult to categorize. Hickory nuts (Carya) and walnuts (Juglans) in the Juglandaceae family grow within an outer husk; these fruits are technically drupes or drupaceous nuts, thus are not true botanical nuts.

All content from Kiddle encyclopedia articles (including the article images and facts) can be freely used under Attribution-ShareAlike license, unless stated otherwise. Cite this article:
Stone fruit Facts for Kids. Kiddle Encyclopedia.