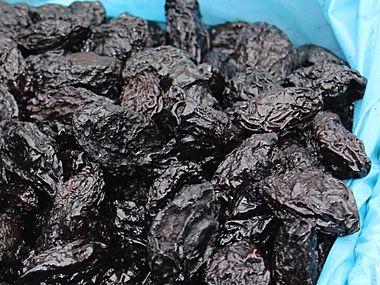 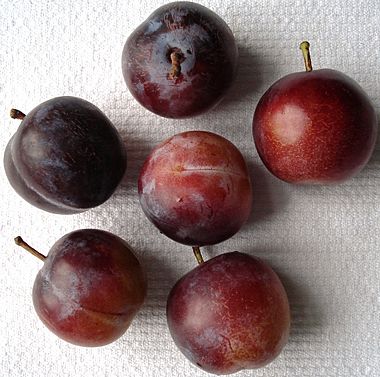 Raw, fresh plums that have not been dried into prunes

A prune is a dried plum of any cultivar, mostly the European plum (Prunus domestica). Use of the term "prune" for fresh plums is obsolete except when applied to varieties (of plum) grown for drying.

Most prunes are freestone cultivars (the pit is easy to remove), whereas most plums grown for fresh consumption are clingstone (the pit is more difficult to remove).

Prunes are 64% carbohydrates including dietary fiber, 2% protein, a rich source of vitamin K, and a moderate source of B vitamins and dietary minerals. The sorbitol content of dietary fiber likely provides the laxative effect associated with consuming prunes. Contrary to the name, boiled plums or prunes are not used to make sugar plums.

More than 1,000 plum cultivars are grown for drying. The main cultivar grown in the United States is the 'Improved French' prune. Other varieties include 'Sutter', 'Tulare Giant', 'Moyer', 'Imperial', 'Italian', and greengages. Fresh prunes reach the market earlier than fresh plums and are usually smaller in size.

In 2001, plum growers in the United States were authorized by the Food and Drug Administration to call prunes "dried plums". Due to a perception that prunes relieve constipation (perceived as derogatory), some distributors stopped using the word "prune" on packaging labels in favor of "dried plums".

Prunes contain dietary fiber (about 7% of weight; table) which may provide laxative effects. Their sorbitol content may also be responsible, a conclusion reached in a 2012 review by the European Food Safety Authority. The report also demonstrated that prunes effectively contribute to the maintenance of normal bowel function in the general population if consumed in quantities of at least 100 grams (3.5 oz) per day. 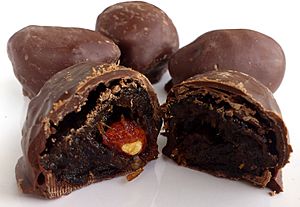 Russian prunes in chocolate with an almond in the middle

Prunes are used in preparing both sweet and savory dishes.

Contrary to the name, boiled plums or prunes are not used to make sugar plums, which instead may be nuts, seeds, or spices coated with hard sugar, also called comfits.

All content from Kiddle encyclopedia articles (including the article images and facts) can be freely used under Attribution-ShareAlike license, unless stated otherwise. Cite this article:
Prune Facts for Kids. Kiddle Encyclopedia.