A "vitamin" is also a pill that contains vitamins, eaten regularly to keep one healthy. 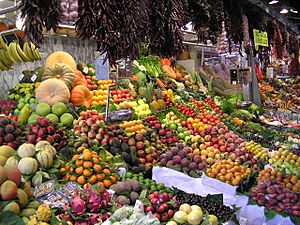 Fruits and vegetables are a source of vitamins

A vitamin is a chemical compound that is needed in small amounts for the human body to work correctly. They include Vitamin A, many B vitamins (like B1, B2, B3, B6, and B12), Vitamin C, Vitamin D, Vitamin E, and Vitamin K. For example, citrus fruits such as oranges and lemons contain vitamin C.

The term was coined in 1912 by biochemist Casimir Funk, who isolated a complex of micronutrients and proposed the complex be named vitamine. By convention the word vitamin does not include other essential nutrients, such as certain minerals, essential fatty acids and essential amino acids.

Thirteen vitamins are recognized at present. Vitamins are classified by their biological and chemical activity, and not their structure. Each vitamin name (the word vitamin followed by a letter) refers to a number of vitamer compounds which all show the same biological activity. For example, vitamin A refers to several different chemicals. Vitamers convert to the active form of the vitamin in the body. They are sometimes inter-convertible to one another as well.

The body does not make these chemicals. They come from other places, usually food. A short term lack of a certain vitamin is usually not a problem, because the body can store vitamins for a short time. Not having a certain vitamin for a longer period of time can lead to different diseases, depending on the vitamin. Probably the best-known of these diseases is scurvy, which results from not having enough Vitamin C. Beriberi and rickets are others.

Vitamins can be either fat-soluble or water-soluble. Fat-soluble vitamins (A, D, E and K) can be stored in the body, and are used when needed. Water-soluble ones only stay in the body a short time.

Currently there are no vitamins F to J. These existed at some time. Today they are no longer seen as vitamins. Some of them were also false leads, and turned out to be something else. Others were renamed as B vitamins. Today, the B vitamins are a whole complex, and not just one vitamin.

The German-speaking scientists who isolated and described vitamin K (in addition to naming it as such) did so because the vitamin is intimately involved in the 'Koagulation' (clotting) of blood following wounding. At the time, most (but not all) of the letters from F through I were already designated, so the use of the letter K was considered quite reasonable. The following table lists chemicals that had previously been classified as vitamins, as well as the earlier names of vitamins that later became part of the B-complex.

All content from Kiddle encyclopedia articles (including the article images and facts) can be freely used under Attribution-ShareAlike license, unless stated otherwise. Cite this article:
Vitamin Facts for Kids. Kiddle Encyclopedia.