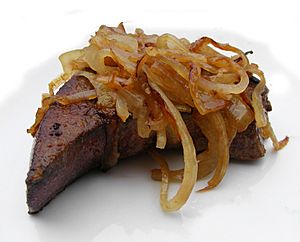 Slice of pig's liver and onions 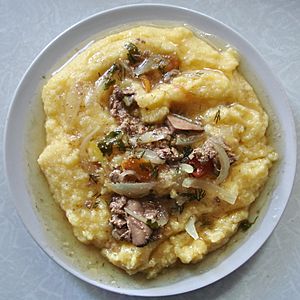 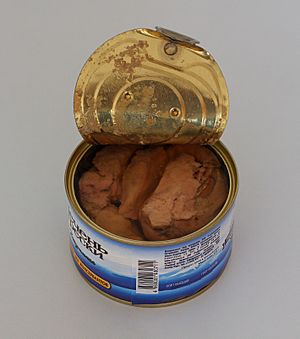 The liver of mammals, fowl, and fish is commonly eaten as food by humans. Domestic pig, lamb, calf, ox, chicken, goose, and cod livers are widely available from butchers and supermarkets while stingray and burbot livers are common in some European countries. Animal livers are rich in iron, copper, the B vitamins and preformed vitamin A. It is unsure if daily consumption of liver can be harmful, as no conclusive research has been done on the toxicity of preformed vitamin A from food. A single serving of beef liver exceeds the tolerable upper intake level of vitamin A. 100 g cod liver contains 5 mg of vitamin A and 100 µg of vitamin D.

In the Romance languages, the anatomical word for "liver" (French foie, Italian fegato, Spanish hígado, etc.) derives not from the Latin anatomical term, jecur, but from the culinary term ficatum, literally "stuffed with figs," referring to the livers of geese that had been fattened on figs (foie gras).

Liver can be baked, boiled, broiled, fried, stir-fried, or eaten raw (asbeh nayeh or sawda naye in Lebanese cuisine, liver sashimi). In many preparations, pieces of liver are combined with pieces of meat or kidneys, like in the various forms of Middle Eastern mixed grill (e.g. meurav Yerushalmi). Spreads or pâtés made from liver have various names, including liver pâté, pâté de foie gras, chopped liver, liverwurst, liver spread, and Braunschweiger. Other liver sausages include mazzafegato or salsiccia matta. A traditional South African delicacy, namely skilpadjies, is made of minced lamb's liver wrapped in netvet (caul fat), and grilled over an open fire.

Some fish livers are valued as food, especially the stingray liver. It is used to prepare delicacies, such as poached skate liver on toast in England, as well as the beignets de foie de raie and foie de raie en croute in French cuisine. Cod liver (usually tinned in its oil and served seasoned) is a popular spread for bread or toast in several European countries. In Russia, it is served with potatoes. Cod liver oil is commonly used as a dietary supplement. Liver of burbot is eaten in Finland: it is common for fish vendors and supermarket fish aisles to sell these fish with liver and roe sacks still attached. These parts are often eaten boiled or added to burbot soup. Burbot and its liver are a traditional winter food.

Very high doses of preformed vitamin A have the potential to be toxic and can cause hypervitaminosis A, a dangerous disorder. There have been several anecdotal reports and a few scientific studies of vitamin A poisoning due to the consumption of the livers of polar bears, walruses, bearded seals, moose, and huskies. The livers of these animals can contain very high levels of vitamin A.

The Inuit will not eat the liver of polar bears or bearded seals. It has been estimated that consumption of 500 grams of polar bear liver would result in a toxic dose for a human.

Russian sailor Alexander Konrad, who accompanied explorer Valerian Albanov in a tragic ordeal over the Arctic ice in 1912, wrote about the awful effects of consuming polar bear liver. Also, in 1913, Antarctic explorers on the Far Eastern Party Douglas Mawson and Xavier Mertz were believed to have been poisoned, the latter fatally, from eating husky liver, though this has been contested recently.

Mercury content in some species can also be an issue; in 2012 the Government of Nunavut warned pregnant women to avoid eating ringed seal liver due to elevated levels of mercury.

The neurotoxin in the liver of the pufferfish (which is consumed in Japanese cuisine as fugu, tightly regulated by Japanese law) contains the highest concentration of the tetrodotoxin, which characterizes the species. As a result, the liver has been illegal to serve since 1984.

Pig liver is a traditional food of immigrant Okinawans in Hawaii. It used to be eaten on New Year's Eve.

All content from Kiddle encyclopedia articles (including the article images and facts) can be freely used under Attribution-ShareAlike license, unless stated otherwise. Cite this article:
Liver (food) Facts for Kids. Kiddle Encyclopedia.