The burbot (Lota lota) is the only gadiform (cod-like) freshwater fish. It is also known as bubbot, mariah, freshwater cod, freshwater ling, freshwater cusk, the lawyer, coney-fish, lingcod, and eelpout. The species is closely related to the marine common ling and the cusk. It is the only member of the genus Lota. For some time of the year, the burbot lives under ice, and it requires frigid temperatures to breed.

The name burbot comes from the Latin word barba, meaning beard, referring to its single chin whisker, or barbel. Its generic and specific names, Lota lota, come from the old French lotte fish, which is also named "barbot" in Old French.

With an appearance like a cross between a catfish and an eel, the burbot has a serpent-like body, but is easily distinguished by a single barbel on the chin. The body is elongated and laterally compressed, with a flattened head and single, tube-like projection for each nostril. The mouth is wide, with both upper and lower jaws having many small teeth. Burbot have two soft dorsal fins, with the first being low and short, and the second being much longer. The anal fin is low and almost as long as the dorsal fin. The caudal fin is rounded, the pectoral fins are fan-shaped, and pelvic fins are narrow with an elongated second fin ray. Having such small fins relative to body size indicates a benthic lifestyle with low swimming endurance, unable to withstand strong currents.

Burbot have circumpolar distribution above 40°N. Populations are continuous from France across Europe and Asia to the Bering Strait. In North America, burbot range from the Seward Peninsula in Alaska to New Brunswick along the Atlantic Coast. Burbot are most common in streams and lakes of North America and Europe. They are fairly common in Lake Erie, but are also found in the other Great Lakes. Recent genetic analysis suggests the geographic pattern of burbot may indicate multiple species or subspecies, making this single taxon somewhat misleading. 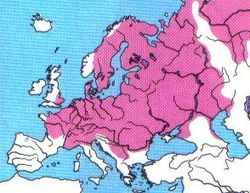 In the United Kingdom, the burbot is possibly extirpated. The last recorded capture was a specimen weighing 1 lb, on 14 September 1969, taken at night by John Dean, at the Old West River (Great Ouse), near Aldreth, Cambridgeshire. The burbot may still survive in the UK. The counties of Cambridgeshire, Norfolk and Yorkshire (particularly the River Derwent or Yorkshire Ouse) seem to be the strongest candidates for areas in which the species might yet survive. Plans to reintroduce this freshwater member of the cod family back into British waters are under investigation.

Burbot live in large, cold rivers, lakes, and reservoirs, primarily preferring freshwater habitats, but able to thrive in brackish environments for spawning. During the summer, they are typically found in the colder water below the thermocline. In Lake Superior, burbot can live at depths below 300 m (980 ft). As benthic fish, they tolerate an array of substrate types, including mud, sand, rubble, boulder, silt, and gravel, for feeding. Adults construct extensive burrows in the substrate for shelter during the day. Burbot are active crepuscular hunters. Burbot populations are adfluvial during the winter, and they migrate to near-shore reefs and shoals to spawn, preferring spawning grounds of sand or gravel.

Burbot reach sexual maturity at between four and seven years of age. Spawning season typically occurs between December and March, often under ice at extremely low temperatures ranging between 1 and 4°C. Though a relatively short season lasting from two to three weeks, burbot spawn multiple times, but not every year.

As broadcast spawners, burbot do not have an explicit nesting site, but rather release eggs and sperm into the water column to drift and settle. When spawning, many male burbot gather around one or two females, forming a spawning ball. Writhing in the open water, males and females simultaneously release sperm and eggs. Depending on water temperatures, the incubation period of the eggs lasts from 30 to 128 days. Fertilized eggs then drift until they settle into cracks and voids in the substrate.

Depending on body size, female burbot fecundity ranges from 63,000 to 3,478,000 eggs for each clutch. Rate of growth, longevity, and age of sexual maturity of burbot are strongly correlated with water temperature; large, older individuals produce more eggs than small, younger individuals. Eggs are round with a large oil globule, about 1 mm (0.039 in) in diameter and have an optimal incubation range between 1 and 7°C (34 and 45°F).

Newly hatched burbot larvae are pelagic, passively drifting in the open water. Habitats about 12°C (54°F) are known to be intolerable for larval burbot. By night, juveniles are active, taking shelter during the day under rocks and other debris. Growing rapidly in their first year, burbot reach between 11 and 12 cm (4.3 and 4.7 in) in total length by late fall. During their second year of life, burbot on average grow another 10 cm (3.9 in).

Burbot transition from pelagic habitats to benthic environments as they reach adulthood, around five years old. Average length of burbot by maturity is about 40 cm (16 in), with slight sexual dimorphism. Maximum lengths range between 30 and 120 cm (12 and 47 in), and weights range from 1.0 to 12 kg (2.2 to 26.5 lb).

At the larval stage, month-old burbot begin exogenous feeding, consuming food through the mouth and digesting in the intestines. Burbot at the larval stage and into the juvenile stage feed on invertebrates based on size. Under 1 cm, burbot eat copepods and cladocerans, and above 1 and 2 cm, zooplankton and amphipods. As adults, they are primarily piscivores, preying on lamprey, whitefish, grayling, young northern pike, suckers, stickleback, trout, and perch. At times, burbot also eat insects and other macroinvertebrates, and have been known to eat frogs, snakes, and birds. Having such a wide diet is also correlated to their tendency to bite lures, making them very easy to catch. Burbot are preyed upon by northern pike, muskellunge, and some lamprey species. 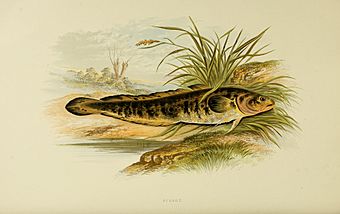 An 1879 illustration by Alexander Francis Lydon

A book written in 1590 in England notes that burbot were so common that they were used to feed hogs.

The burbot is edible. In Finland, its roe and liver are highly regarded as delicacies, as is the fish itself. An annual spearfishing tournament is held near Roblin, Manitoba. One of the highlights of the tournament is the fish fry, where the day's catch is served deep-fried. When cooked, burbot meat tastes very similar to American lobster, leading to the burbot's nickname of "poor man's lobster".

In the 1920s, Minnesota druggist Theodore "Ted" H. Rowell and his father, Joseph Rowell, a commercial fisherman on Lake of the Woods, were using the burbot as feed for the foxes on Joe's blue fox farm. They discovered the burbot contained something that improved the quality of the foxes' furs; this was confirmed by the fur buyers, who commented that these furs were superior to other furs they were seeing. Ted Rowell felt it was something in the burbot, so he extracted some oil and sent it away to be assayed. The result of the assay was that the liver of the burbot has three to four times the potency in vitamin D, and four to 10 times in vitamin A, than "good grades" of cod-liver oil. Their vitamin content varies from lake to lake, where their diets may have some variation. Additionally, liver makes up about 10% of the fish's total body weight, and its liver is six times the size of those of freshwater fish of comparable size. The oil is lower in viscosity, and more rapidly digested and assimilated than most other fish-liver oils. Rowell went on to found the Burbot Liver Products Company, which later became Rowell Laboratories, Inc., of Baudette, Minnesota, and is today a subsidiary of Solvay Pharmaceuticals of Brussels, Belgium. 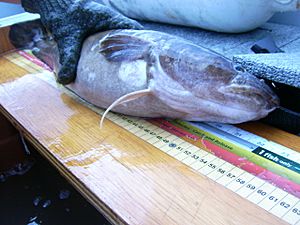 The burbot is a tenacious predator, which sometimes attacks other fish of almost the same size, and as such, can be a nuisance fish in waters where it is not native. Recent discoveries of burbot in the Green River at Flaming Gorge Reservoir in Utah have concerned wildlife biologists, who fear the burbot could decimate the sport-fish population in what is recognized as one of the world's top brown trout fisheries, because it often feeds on the eggs of other fish in the lake, such as sockeye salmon. The Utah Division of Fish and Game has instituted a "no release" "catch and kill" regulation for the burbot in Utah waterways. However, the regulations have been found to be largely unenforceable.

The town of Walker, Minnesota, holds an International Eelpout Festival every winter on Leech Lake. The festival received national attention on 4 March 2011, when a correspondent from The Tonight Show with Jay Leno did a segment on the event.

Burbot populations are difficult to study, due to their deep habitats and reproduction under ice. Although burbot global distribution is widespread and abundant, many populations have been threatened or extirpated. As the burbot lacks popularity in commercial fishing, many regions do not even consider management plans. Pollution and habitat change, such as river damming, appear to be the primary causes for riverine burbot population declines, while pollution and the adverse effects of invasive species have the greatest influence on lacustrine populations. Management of burbot is on low priority, being nonexistent in some regions.

All content from Kiddle encyclopedia articles (including the article images and facts) can be freely used under Attribution-ShareAlike license, unless stated otherwise. Cite this article:
Burbot Facts for Kids. Kiddle Encyclopedia.