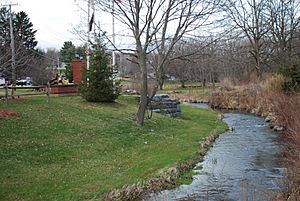 A stream in New York called the Sprout Creek

A stream is a natural flow of water moving across country between banks. It is smaller than a river.

The primary meaning of stream is a body of water, confined within a bed and banks, and having a detectable current. Synonyms or related words include river, creek, tributary, run, branch, brook, bourne, wash, and fork. Navigable streams are sometimes called waterways, though the term may apply to any size of permanent and natural water feature except oceans.

Generally, streams that form only during and immediately after precipitation are termed ephemeral streams.

Typically, streams are said to have a particular profile, beginning with steep gradients, no flood plain, and little shifting of channels, eventually evolving into streams with low gradients, wide flood plains, and extensive meanders. The initial stage is sometimes termed a "young" stream, and the later state a "mature" or "old" stream. However, a stream may meander for some distance before falling into a "young" stream condition.

When a stream flows over an especially resistant stratum and forms a waterfall or cascade, or the same results because for some reason the base level of erosion suddenly drops, perhaps as a result of a fault, the resulting sudden change in stream elevation is called a nickpoint. The stream, of course, expends kinetic energy in "trying" to eliminate the nickpoint.

Meanders are looping changes of direction of a stream. These may be somewhat sine-wave in form. Typically, over time, the meanders don't disappear but gradually migrate downstream. However, if some resistant material slows or stops the downstream movement of a meander, a stream may erode through the neck between two legs of a meander to become temporarily straighter, leaving behind an arc-shaped body of water termed an oxbow lake or bayou. A flood may also result in a meander being cut through in this way.

The point at which a stream empties into an ocean or other large body of relatively level water is termed the mouth. There may often be an estuary or delta at the mouth.

Other uses for "stream"

All content from Kiddle encyclopedia articles (including the article images and facts) can be freely used under Attribution-ShareAlike license, unless stated otherwise. Cite this article:
Stream Facts for Kids. Kiddle Encyclopedia.