Perisher Ski Resort (known as Perisher Blue until 2009) is the largest ski resort in the Southern Hemisphere. Located in the Australian Snowy Mountains, the resort is an amalgamation of four villages (Perisher Valley, Smiggin Holes, Guthega, and Blue Cow) and their associated ski fields, covering approximately 12 square kilometres (5 sq mi), with the base elevation at 1,720 metres (5,640 ft) AHD, and the summit elevation of 2,054 metres (6,739 ft) at the top of Mount Perisher. 4.4 square kilometres (1.7 sq mi) of this area is covered by 240 snow guns, which are used to artificially supplement the natural snowfall. Perisher was acquired by Vail Resorts, United States on 30 March 2015 for a sum of approximately AU$177 million.

The resort is accessible by road and by the Skitube from Jindabyne, Australia's only underground rack railway. The main skiing period is in July and August, with the official season running from the second weekend in June to the first weekend of October. Perisher consists of 47 lifts: The Village Eight Express, an eight-seater chairlift (built in 2003), two high-speed quad detachable chairlifts, five fixed-grip quad chairlifts, four double chairlifts, two triple chairlifts, 21 T-Bars, three J-bars, seven ski carpets, and 2 rope tows. The run difficulties are graded 22% beginner, 60% intermediate and 18% advanced.

The Snowy Mountains region is thought to have had Aboriginal occupation for some twenty thousand years. Large scale intertribal gatherings were held in the High Country during summer for collective feasting on the Bogong moth. This practice continued until around 1865. The area was first explored by Europeans in 1835, and in 1840, Edmund Strzelecki ascended Mount Kosciuszko and named it after a Polish patriot. High country stockmen followed who used the Snowy Mountains for grazing during the summer months. Banjo Paterson's famous poem The Man From Snowy River recalls this era. The cattle graziers have left a legacy of mountain huts scattered across the area. The Kosciuszko National Park in which Perisher ski resort is situated, came into existence as the National Chase Snowy Mountains on 5 December 1906. In 1944 this became the Kosciuszko State Park, and then the Kosciuszko National Park in 1967.

In 1995, Perisher Smiggins and Alpine Australia Group (Blue Cow/Guthega) merged to form Perisher Blue, which merged all four resorts as they are today, now known as Perisher. In 2009 Perisher had 47 lifts covering 1,245 hectares and four village base areas: Perisher Valley, Blue Cow, Smiggin Holes and Guthega. 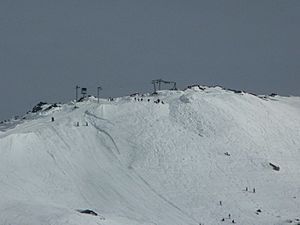 A story, which may be apocryphal, credits James Spencer, who settled in the area in the 1840s with saying 'What a perisher' when caught in a storm. The area was used by mountain graziers during the summer months for many years.

It was the construction of the vast Snowy Mountains Hydro-Electric Scheme from 1949 that really opened up the Snowy Mountains for large scale development of a ski industry and led to the establishment of Perisher as a leading Australian resort. The first ski lodges opened in 1951 and by 1957, a number of ski clubs operating.

As the number of skiers increased, services, facilities and means of access were improved, and Perisher's first lodges were constructed. Telemark and the Snow Revellers Club being completed in 1952. In the winter of 1953 the first oversnow transport operated to Perisher Valley. It was greeted by the inhabitants with cheers and celebrations.

In 1958, Svere Kaaten, another pioneer of the mountains, built a sophisticated rope tow at North Perisher. Ken Murray, an old friend of Svere's built another rope tow and Perisher's first T-bar. Development continued and Mount Perisher Double Chair was opened in 1962. After the opening of the first chairlift, T-bar expansion and rope tows, the Perisher area thrived. Murray Publishers Pty Limited was taken over by Australian Consolidated Press in 1972 and Kosciuszko Alpine Resorts was formed. 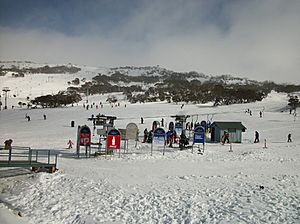 The high Snowy Mountains were long used by graziers for summer pasturelands. The name "Smiggin Holes" is said to be of Scottish origin and a reference to the effects of trampling cattle causing depressions that filled with water.

The first Kosciuszko Chalet was built at Charlotte Pass in 1930, giving relatively comfortable access to Australia's highest terrain. The growing number of ski enthusiasts heading to Charlotte Pass led to the establishment of a cafe at Smiggin Holes around 1939, where horse-drawn sleighs would deliver skiers to be begin the arduous ski to the Kosciusko Chalet.

The Kosciuszko National Park came into existence as the National Chase Snowy Mountains on 5 December 1906. In 1944 this became the Kosciuszko State Park, and then the Kosciuszko National Park in 1967. The name was misspelt as Kosciusko until 1997. The existence of the Park ensured the decline of the summer grazing industry, but the Snowy Mountains Hydro-Electric Scheme development of 1949-1974 ensured the opening up and development of Skiing in New South Wales, including the steeper and higher terrain around Mount Perisher, near Smiggins. 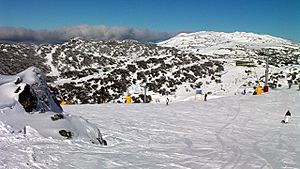 Some time after 1840 James Spencer, a grazier, obtained the lease for all the high country on the main range, including Kosciuszko and Blue Cow peaks. His homestead was situated at West Point (now known as Waste Point) near the entrance to Kosciuszko National Park. Apparently Spencer crossed some imported black English Shorthorn cattle with white Shorthorns, obtaining offspring with blue roan coats. Blue Cow Mountain was named after one of these cross-bred cows, which would disappear after the thaw each year and would invariably be found on the mountain before the next winter.

In the 1970s, the National Parks and Wildlife Service carried out studies for the development of skiing at Mount Blue Cow, in response to the identified need for the expansion of suitable areas and facilities to enable the continued growth of alpine skiing within the Park. In November 1984 the bid by Mount Blue Cow Ski Bowl Pty Limited was selected.

The last establishment of a major skifield in New South Wales came with the development of Blue Cow Mountain in the 1980s. In 1987 the Swiss designed Skitube Alpine Railway opened to deliver skiers from Bullocks Flat, on the Alpine Way, to Perisher Valley and to Blue Cow, which also opened in 1987. The operators of Blue Cow purchased Guthega in 1991, and the new combined resort later merged with Perisher-Smiggins to become the largest ski resort in the Southern Hemisphere. The resort opened in July 1987 and despite transport difficulties (caused by the delay in the completion of the Skitube alpine railway beyond Perisher) the response to the facilities and the mountain was overwhelmingly positive.

Today Blue Cow includes the facilities of Blue Cow Resort Centre at 1905m and Guthega Ski Centre at 1640m. The highest lifted point on the Blue Cow Side of Perisher is 1960m reached by the Summit Quad Chairlift. The vertical drop to the base of the Ridge at 1605m is 360m. Blue Cow's 14 ski lifts open daily during winter from 8.30am to 5.00pm weather permitting. There is also snowmaking over an area serviced by six lifts. 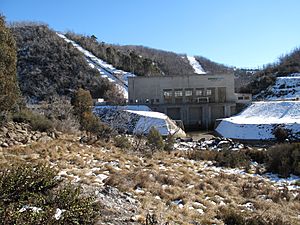 Guthega Resort was established in the 1950s along with Perisher Valley and Smiggin Holes, when improved access to the mountains, created by the Snowy Mountains Hydro Electric Scheme, and the associated influx of European migrants with skiing experience, stimulated the growth of skiing in New South Wales. The Construction of Guthega Dam brought skiers to the isolated Guthega district and a rope tow was installed there in 1957.

Mainly because of its "out of the way" location, Guthega remained a separate small resort, operated by Guthega Development Pty Ltd, with only a handful of lodges, few lifts, and limited patronage from day skiers, who had to contend with more difficult road conditions than those to Smiggin Holes or Perisher Valley.

In 1982 the Car Park chairlift was installed, which overcame the need for visitors to walk some distance uphill to the upper end of the village to reach the bottom lift, thus making the resort more appealing to day visitors.

In 1991, Guthega was purchased by the Alpine Australia Group Pty Limited, the then operator of the Blue Cow Resort. This led to the operation of two resorts becoming integrated in 1992, thus providing day access into Guthega via the Skitube alpine railway and the Blue Cow and Link Management Unit ski slopes.

During the 2013-14 summer, the Freedom Quad Chair was constructed. It opened for the 2014 season, providing access to skiable terrain without the use of T-Bars or J-Bars. It replaced the former Cow Pastures J-Bar. 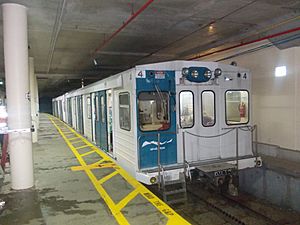 Initially, Skitube alpine railway was designed as a winter based access system to improve entry to the Perisher Range ski fields. Until then, these areas were served by a single road of limited capacity that was and still often is, adversely affected by snow and ice during winter. The Skitube was deemed to be the most efficient and environmentally acceptable alternative available. When it was decided to go ahead with the development of Mount Blue Cow in 1984, Skitube was the most practical option for providing access to the resort, and so Skitube was extended from Perisher to Mount Blue Cow.

Skitube is a Swiss designed rack-rail train that takes passengers from Bullocks Flat on the Alpine Way through a tunnel in the Ramshead Range to the Perisher Resort, stopping in the underground station at Perisher Valley. Skitube then proceeds to Blue Cow Mountain via another tunnel through the Perisher Range. The tunnel is Australia's longest transport tunnel at 6.3 kilometres (3.9 mi) long, and at its deepest point it is 550 metres (1,800 ft) below the surface.

Perisher has a subpolar oceanic climate (Köppen Cfc) with cool summers and cold winters, although the higher peaks have an alpine climate (ETH). Records and averages taken at Perisher Valley, New South Wales, 36.40°S 148.41°E, since 1976. 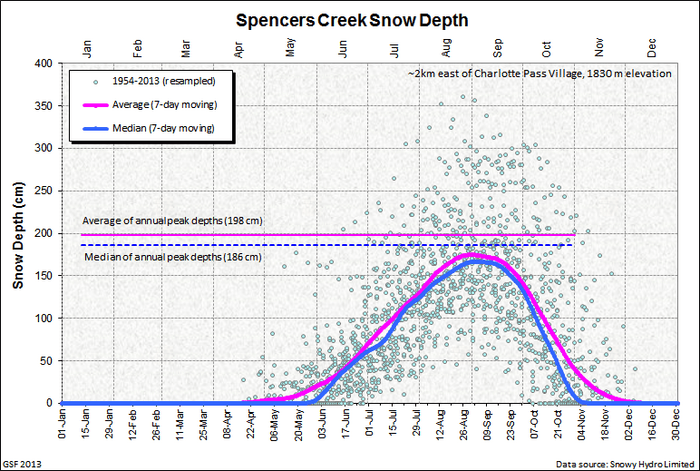 All content from Kiddle encyclopedia articles (including the article images and facts) can be freely used under Attribution-ShareAlike license, unless stated otherwise. Cite this article:
Perisher Ski Resort Facts for Kids. Kiddle Encyclopedia.